Lou Gehrig’s 1928 New York Yankees World Champions wristwatch sold for $340,000 on Monday, the day after SCP Auctions’ “Mid-Summer Classic” online auction came to a close. The wristwatch, which was the headliner in SCP’s just-closed event, turned out to be too alluring for the highest bidder to pass up.

“Lou Gehrig’s 1928 World Series watch is one of the most significant items ever offered at auction representing baseball’s beloved ‘Iron Horse,’” said Dan Imler, vice president of SCP Auctions. “We are thrilled to see this treasure sell to an advanced collector for a price worthy of its quality and historical importance.”

The $340,000 price marks one of the highest prices ever paid for a Gehrig item. In total, the auction of 850 sports memorabilia lots brought in just over $2.9 million. In November 2011, SCP Auctions sold a game-used bat swung by Gehrig in 1939 to hit his final home run with the New York Yankees during a Spring Training game for $403,664.

What’s more, both the consignor of the watch and SCP Auctions have agreed to make donations to their local ALS Association chapters. “With this summer marking the 75th anniversary of Gehrig’s ‘Luckiest Man Alive’ speech, it seems only fitting,” added Imler.

The buyer of the watch wishes to remain anonymous at this time. 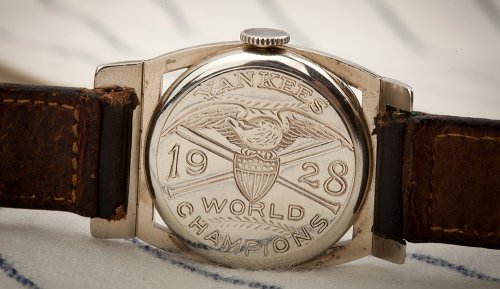 About SCP Auctions
SCP Auctions, Inc. has been a leader in brokering and auctions of important sports memorabilia and cards since 1979. The Southern California based firm conducts online auctions throughout the year, highlighted by their Premier Auctions in the spring and fall.  SCP Auctions has handled some of the most significant individual items and prominent collections in their field, such as the record-setting sale of the earliest known jersey worn by New York Yankees legend Babe Ruth ($4.4 million) the famed T206 Honus Wagner baseball card ($2.8 million) and Babe Ruth’s bat used to hit the first home run in Yankee Stadium ($1.3 million). Interested bidders can call (800) 350-2273 or visit SCP Auctions online at www.SCPAuctions.com for more information on how to participate.