SCP Auctions is thrilled to announce it will be presenting the most sought-after Kobe Bryant card in the hobby in its 2022 Spring Premier Auction, the 1997-98 Metal Universe Precious Metal Gems Kobe Bryant. The card is limited edition as it is numbered 60/100, making it one of the most valuable Kobe cards in existence. The example SCP is offering is even more rare, because it is the only known autographed Kobe PMG. The beautiful black signature from the Black Mamba was graded a Mint 9 by PSA on the Authentic graded card. The stellar autograph was also authenticated by JSA.

In 1997-98 Kobe had a breakout sophomore season, earning his first All Star appearance. He helped lead the Lakers all the way to the Western Conference Finals that year, a sign of things to come for the eventual five-time NBA champion.

Out of the 100 1997 PMG Kobes printed, 10 of them are green and 90 are the ruby (red) color SCP is offering. The cards were produced with colored foil, making these gems very difficult to find in a high grade. The only thing tougher to find than a Kobe PMG in a high grade is one signed by the legendary Laker, as this is the only one known to exist. It can be yours when the bidding begins May 18 and concludes June 4. For more information, visit www.scpauctions.com. 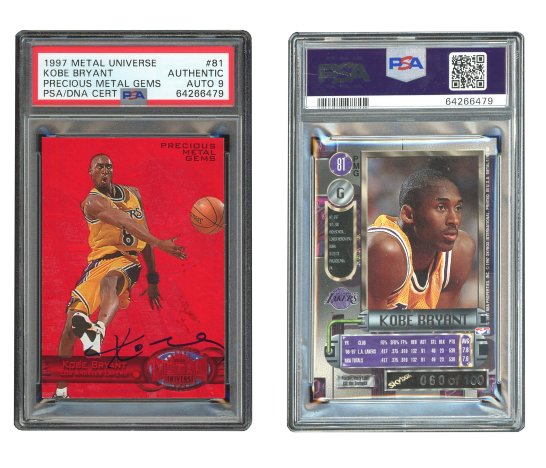