SCP Auctions is proud to present a 1980-81 Wayne Gretzky Edmonton Oilers game worn blue Set 1 road jersey in there April Auction. Bidding begins on April 10th and concludes on April 27th at www.scpauctions.com. By the time he was 12 years-old and playing in the prestigious International Pee Wee Hockey Tournament in Quebec City’s Le Colisee, Wayne Gretzky was already so famous that he was besieged routinely by autograph seekers in every rink he played in.

At age 15, he tried to get his team, the Sault Ste. Marie Greyhounds, to assign him jersey number 9 in honor of his favorite player, Gordie Howe. But 9 belonged to a veteran player, so Gretzky was given number 19 and, a few weeks later, number 99.

At 17 he turned pro with the World Hockey Association’s Indianapolis Racers who quickly traded him to the Edmonton Oilers, where he was allowed to keep uniform number 99. In 1979, Gretzky made his NHL debut. Many thought he would fade when he started getting banged around in the more physical league. They thought wrong. 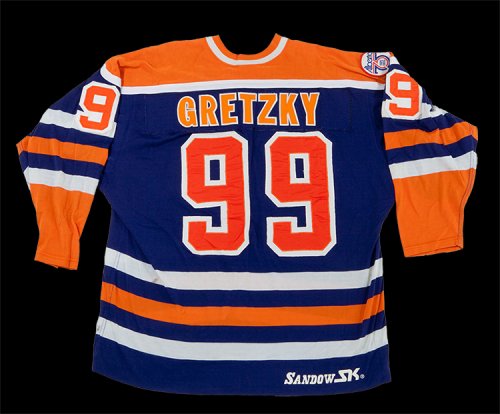 No one ever had seen a player like Gretzky. Though he was barely 6-0 and 155 pounds, Gretzky’s raptorial quickness to the puck, instinct for the creation and exploitation of space and darting elusiveness made him virtually unstoppable. Over the next two decades, Wayne Gretzky lifted the sport of hockey to new and dizzying heights while establishing himself as the game’s all-time greatest player. He had an unprecedented 15 seasons with more than 100 points, and four with more than 200. Gretzky’s dominance simply made the record book obsolete. His numbers prove that he is the most statistically dominant player in the history of North American team sports.

This incredible jersey dates from Wayne Gretzky’s second season with Edmonton and is generally regarded as the finest Gretzky game jersey in the hobby. It’s provenance and physical attributes have been verified by a committee of the most revered experts in the field of hockey memorabilia.

It’s authentication portfolio includes documentation from MeiGray, Classic Auctions, Milt Byron and Brad Foote among others. After more than a dozen years of seclusion in an advanced private collection, SCP Auctions is privileged to reintroduce this monumental hockey treasure to the collecting public.