In Game Six of the 1977 World Series, Reggie Jackson saw three consecutive pitches from three different Los Angeles Dodgers pitchers and he sent each of them far into the Bronx night on his way to a World Series performance that still resounds as one of the greatest feats in baseball history. Jackson’s three home runs caused a near riot in the Bronx, propelled the Yankees to a World Championship, and cemented his legacy as the one and only “Mr. October.”

SCP Auctions is proud to be able to auction off  Reggie Jackson’s 1977 WS Game Six (3 HR) Jersey in our April 2013 auction.  A portion of the proceeds will benefit Reggie Jackson’s “Mr. October Foundation for Kids”.

The consignment deadline is March 4, 2013 for our April Premier Auction. Call or e-mail today for details on the consignment opportunity of the year. 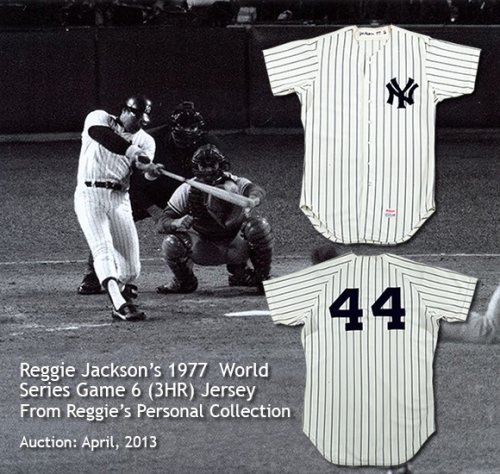