Twenty-five years after Kobe Bryant made his rookie playoff debut, SCP Auctions recently discovered the only Kobe game worn jersey ever photomatched to his 1996-97 rookie season playoff run, and it’s headlining next month’s Spring Premier Auction. The incredible jersey has just been Resolution photomatched to four games from the Mamba’s rookie campaign, including two playoff games. Kobe donned the signature purple and gold threads of this jersey April 13, April 17, May 8, and May 10, 1997.

May 8 and 10 were Games 3 and 4 of the Lakers’ Western Conference Semifinals matchup with the Utah Jazz, and part of the first NBA playoffs Kobe ever participated in. Long before the Mamba became fourth on the all-time NBA playoff scoring list, the future Hall of Famer was in the genesis of his storied playoff career when he wore this jersey against the Jazz. In Game 3, Kobe poured in 19 points in a 104-84 Lakers victory. In Game 4, the 18-year-old guard led all bench players with 9 points and 2 rebounds in a 110-95 defeat. Game 4 was also the final time he put on a home Lakers jersey in 1997, making this jersey the final gold threads worn by Bryant his rookie year.

In the two matched rookie-year regular season games April 13 and 17, Kobe combined to put up 15 points and 5 assists in a pair of victories against the Jazz and Sacramento Kings. Not only is the rookie jersey photomatched to two playoff and two regular-season games, but it was also matched to his 1997 Skybox Z-Force trading card. Bryant can be spotted wearing the jaw-dropping jersey on the back of the card.

In SCP’s opinion, this spectacular specimen from the legendary Laker’s rookie campaign could set a new price record for a game worn basketball jersey. The current record is $3.69 million for another Kobe rookie jersey. However, that example was worn solely in the regular season, whereas this magnificent jersey was worn in the Mamba’s first-ever playoffs.

Bidding in the 2022 Spring Premier begins May 18 and concludes June 4. For more information, visit www.scpauctions.com. 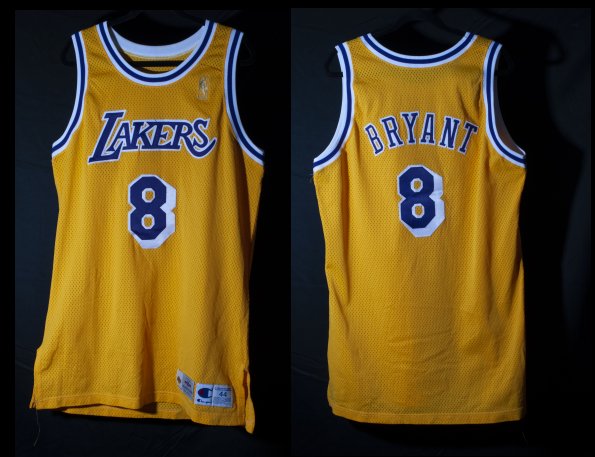 Other items consigned for this auction include: