SCP Auctions is pleased to present an assortment of Pittsburgh Steelers two-time Super Bowl winning quarterback Ben Roethlisberger’s memorabilia – directly from “Big Ben” himself – as part of its 2015 Fall Premier online auction. Bidding began on Wed., Nov. 18, and will conclude this Sat., Dec. 5 at www.scpauctions.com. A portion of the proceeds from the sale of each of Roethlisberger’s lots will go toward the Ben Roethlisberger Foundation, which supports K-9 units and service dogs of police and fire departments throughout the U.S.

The top bid currently for any of Roethlisberger’s memorabilia is $3,328 for his Pittsburgh Steelers game-worn and signed home jersey that he wore on Dec. 28, 2008, versus Cleveland in the final regular-season game of the team’s eventual Super Bowl winning campaign. Late in the first half, Roethlisberger dropped back and completed a short pass to tight end Heath Miller. On the play, he took a vicious hit from Browns linebackers’ Willie McGinest and D’Qwell Jackson and suffered a serious head/neck injury. He lay on the field for 15 minutes and had to be carted off the field on a stretcher as 60,000+ fans at Heinz Field held their collective breath. Ultimately, he sustained a concussion, but it looked much worse. Five weeks later, he led the Steelers to a 27-23 victory over the Arizona Cardinals in Super Bowl XLIII. The jersey up for bid had to be cut off Roethlisberger’s body at the time of his injury. 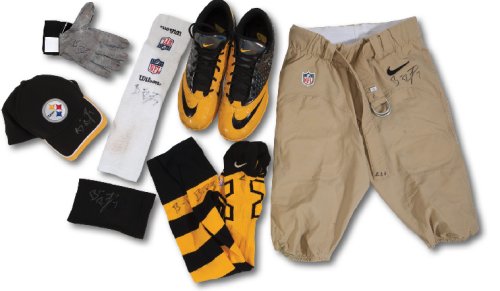 Another Roethlisberger lot that’s generating plenty of bids is his Steelers’ game-worn, signed and inscribed nine-piece uniform ensemble from Oct. 26, 2014, a game in which he led the black-and-gold to a 51-34 victory over the visiting Indianapolis Colts by throwing for 522 yards and six touchdowns. This lot is currently sitting at $2,662 with three days remaining in the online auction. Three different pairs of his game-worn and dual-signed cleats are also up for bid including a pair of his size 14 Nike “Superbad Pro” cleats from Nov. 2, 2014, when he led Pittsburgh to a 43-23 win over the Baltimore Ravens. In that game, he threw for 340 yards and six more touchdowns. The current high bid for that pair is $1,774. Every lot includes a signed Letter of Authenticity from Roethlisberger.

Bidding is open to registered bidders only. For more information on how to participate, please visit www.scpauctions.com or call (949) 831-3700.

SCP Auctions is proud to present an incredible assortment of vintage Olympic memorabilia as part of its 2015 Fall Premier online auction including a rare 22-karat solid gold medal for Automobile Racing from the 1900 Paris Summer Games, one of only two known to exist. Online bidding is live and concludes on Sat., Dec. 5, at www.scpauctions.com. A total of 35 different Olympic lots are featured celebrating two more gold medal victories from Paris (1900); Amsterdam (1928) in Women’s Gymnastics; and Berlin (1936) in Men’s Basketball. Numerous Olympic torches from both the Summer and Winter Games dating from 1948 (London) all the way up to 2008 (Beijing) are also included.All of the various Olympic lots up for bid can be viewed here. 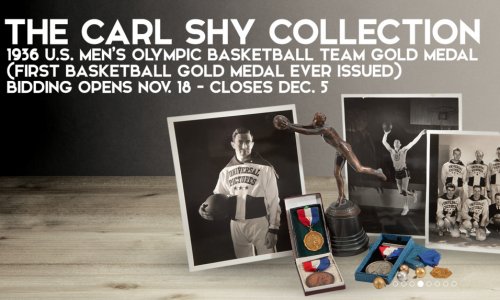 Currently, the Olympic lot garnering the most attention is the rare 1936 U.S. Men’s Basketball team gold medal that belonged to Carl Shy, a former UCLA standout guard. This is a very significant gold medal as the Berlin Games represented the very first international Olympic basketball tournament. With four days left in the auction, it has collected six bids with the highest being $12,081. Next up is a lot featuring the late Herb Brooks’ Team USA warm-up velour jacket, the very one the U.S. Men’s Hockey coach wore during the team’s miraculous 1980 gold medal run including the actual gold-medal ceremony in Lake Placid, New York. With eight bids, it presently sits at $10,721. Running third is a gold medal from the 1928 Games that marked the largest spike in female competitors to date. The lot in question was earned by the host nation, Netherlands, which won the team gold medal in the Olympics’ first ever Women’s Gymnastics competition amid controversial protests against allowing women to compete. With three bids, it currently sits at $9,075.

Amongst the other notable Olympic lots are a pair of 1900 Paris Summer Games 1st-place winner’s gold medals in Athletics (track and field) and Swimming, both with minimum bids starting at $5,000, as well as a second Herb Brooks piece, this one his actual wool hockey sweater worn during the 1960’s as a member of the United States International Hockey squad. With six bids, it has already reached $4,290. The additional gold medals from Paris are both made of gold-plated silver as were the vast majority for those Games.

Bidding is open to registered bidders only. For more information on how to participate, please visit www.scpauctions.com or call (949) 831-3700.

With just three days remaining in SCP Auctions’ 2015 Fall Premier, the bidding wars on several pairs of game-used and autographed basketball shoes and football cleats are starting to take off. From Michael Jordan’s game-worn Air Jordans to soon-to-be-retired Kobe Bryant’s Nike ‘Kobe IX Elite” shoes to Big Ben Roethlisberger’s game-used pair of Nike Flyware cleats, the auction is loaded with kicks! Make sure to place your initial bids in order to qualify for the extended bidding period on Saturday night. Initial bidding concludes on Saturday, Dec. 5, at 5 pm PST. Good luck to all registered bidders.