SCP Auctions’ “Mid-Summer Classic” online auction is currently underway and runs through Sat., August 22 at www.scpauctions.com. The auction features nearly 1,000 different lots of vintage sports memorabilia and among the most intriguing is a 1936 Winter Olympics gold medal that was presented to Great Britain hockey goaltender Jimmy Foster.

That year, the fourth Winter Olympic Games were held from Feb. 6 through 16 in the neighboring villages of Garmisch and Partenkirchen in Germany’s Bavarian Alps. These Olympics were the last in which the summer and winter games were both held in the same country. Star attractions included a pair of Norwegians named Ivar Ballangrud, who won three individual gold medals and narrowly missed a fourth in men’s speed skating; and Sonja Henie, who won her third straight gold medal in in women’s figure skating. But as the games unfolded, the story generating the most interest was of 11 British Canadians who came together to make history by leading Great Britain to its only Olympic gold medal in ice hockey. The squad, led by Captain Carl Erhardt, had a 31-year-old goalie named Jimmy Foster between the pipes who cemented the team’s legacy by allowing just three goals over seven games and posting four shutouts during the Games. In addition to winning the gold medal, the Brits stopped Canada’s undefeated Olympic winning streak at 20 games with a 2-1 victory.

Now up for bid is Foster’s gold medal from the ’36 Games, which boasted the largest and heaviest medals ever awarded to Olympic athletes: 100 millimeters in diameter and four millimeters thick with a weight of 324 grams.

Foster’s arrival for Team Great Britain is certainly a story worth telling. Born in Glasgow, Scotland in 1905, Foster and his family immigrated seven years later to Winnipeg in the province of Manitoba, Canada. He first rose to prominence as a hockey player in the early ‘20s while competing in the Winnipeg Junior Hockey League. Playing with both the Winnipeg Argonauts and later the University of Manitoba, Foster earned a reputation as one of the world’s finest goalies. His team went on to win the Manitoba Junior Provincial Championship in 1925, and he was a two-time winner of the Manitoba Championship; in 1927 with the Winnipeg Winnipegs and again in 1930 with the Elmwood Millionaires. 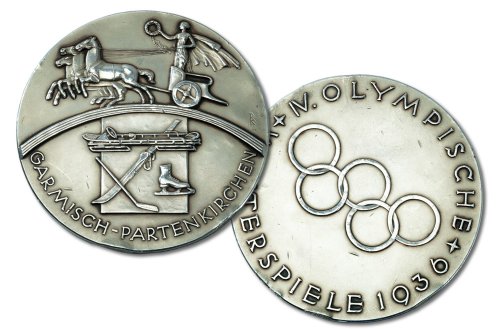 In 1931, Foster moved east to New Brunswick and played for the Moncton Hawks of the Maritime Senior Hockey League, who were coached by fellow Winnipegger Percy Nicklin. Nicklin and Foster would work together successfully over the next eight years, with Nicklin coaching the Brits to their unlikely Olympic triumph in 1936. In 1934, Foster decided to return to the United Kingdom for the first time in more than 20 years, turning his back on the NHL. He spent the next two seasons competing in southwest London for the Richmond Hawks with Nicklin serving as coach. The Canadian Hockey Association subsequently suspended Foster and teammate Alexander Archer for “leaving the dominion without permission” to play in England. The International Ice Hockey Federation upheld the decision and the pair were only cleared to compete in the ’36 Olympics when the Canadians waived the suspension for the duration of the games.

Following his remarkable performance in Garmisch, Foster assisted Britain in retaining the European titles in 1937 and 1938, and spent the summer of 1939 back in Winnipeg. He would never again return to his native land. For more than 60 years he remained the only Scot to win a gold medal at the Winter Olympics until 2002 when Rhona Martin and her curling team won the gold for Great Britain in Salt Lake City. Foster was inducted into the British Hockey Hall of Fame in 1950. In late 1968, during retirement, Foster was stricken by cancer and passed away in Winnipeg on January 4, 1969. He was 63 years old.

Online bidding is open to registered bidders only. The auction is being conducted at www.scpauctions.com. For more information, call 949-831-3700.