One day before the curtain rises on Super Bowl XLV, collectors will be focused on Memory Lane Inc.’s second annual “Big Game Auction”. There is still time to put your best football cards and memorabilia into this once-a-year event where bidding is sure to match the on field intensity in Dallas. Memory Lane is now seeking high quality and rare vintage and modern era football cards, photos, game-worn and game-used items and other outstanding pieces to place in the auction. There’s not much time to waste, though. The consignment deadline is January 4. The auction is slated to close Saturday, February 5.

“Big Game Auction I was really a lot of fun,” said Memory Lane’s J.P. Cohen. “Everyone is thinking football at that time of year and the interest level showed that football collectors are just as passionate and hungry for great items as baseball collectors. If you have football items you’re thinking of selling, this is definitely the right auction for them.”

Last February, Big Game Auction I kicked off with some of the most rare and high-grade football cards ever to hit the open market. A 1952 Bowman “Large” Jim Lansford, graded PSA 9, sold for $25,805. One of only two cards ever to reach that level, the Lansford card is one of the most sought after sports cards in the hobby.

But it wasn’t alone.

A stadium full of top of the line 1935 National Chicle football cards was also on the block including the “holy grail”, a Bronko Nagurski card graded near mint (PSA 7). The most desirable and scarce card in the series, the Nagurski card is a classic and that was proven again when the card realized $24,541 at auction.

Other cards from the pioneering days of pro football included the 1933 Sport Kings Jim Thorpe and Red Grange, each PSA 8. Together, they realized nearly $10,000.

Other rare and interesting pieces in the auction included a Super Bowl XXIV trophy, one of just 400 created for members of the St. Louis Rams organization, and a Hall of Fame alumni jacket once presented to 1940s Chicago Cardinals’ star Charley Trippi.

Memory Lane is currently collecting a fresh batch of similar items to present to its legions of die-hard collectors. The full-color catalog for Big Game Auction II will feature hundreds of lots at a variety of price levels and Memory Lane’s always-unparalleled marketing effort will get you the best price on your rare and high-grade football cards and memorabilia.

If you have something to consign, call (877-606-LANE) or visit Memory Lane’s website (http://www.MemoryLaneInc.com). 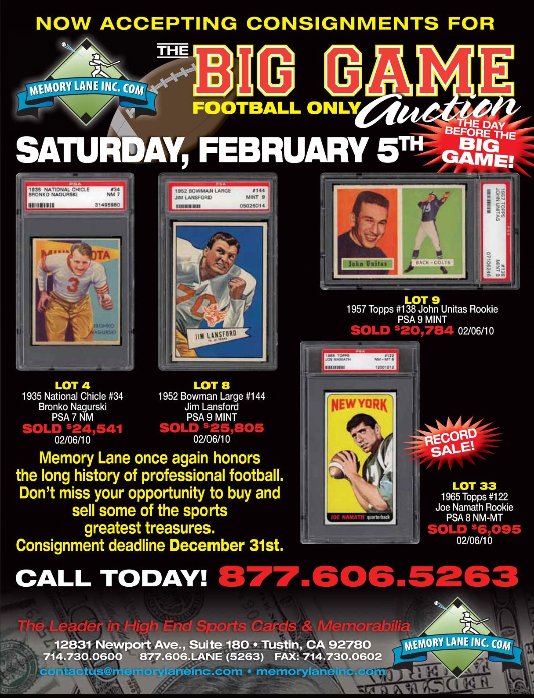