Pages from a ship’s log from June 1846 describing California’s famous “Bear Flag Revolt” that led to the state’s breakaway from Mexico and eventual statehood, and a set of Thomas Bowles 1720 South Sea Bubble playing cards that chronicled the original stock market crash in England, are expected highlights in University Archives’ November 7th auction.

The “Bear Flag Revolt” lot, with an estimate of $30,000-$40,000, is a critical piece of California state history. It’s a first-hand account, upfront and personal, likely written by a bi-lingual ship’s mate, describing American army officer and explorer John C. Fremont’s arrival at Sutter’s Fort, near modern-day Sacramento, in spring 1846, where he encouraged an armed rebellion to wrest control of the state from Mexico, which loosely controlled it at the time, and push for statehood.

The set of South Sea Bubble cards, the finest set known, was first published by Thomas Bowles in London in 1720. The cards bear satirical portrayals, in cartoon form, of the speculators who were involved in various commercial projects started during the South Seas Bubble of that year. They provide a unique historical record of the reckless stock traders of the time, whose actions led to a market crash in England. They also depicted the day’s fashions (est. $40,000-$60,000).

The 226-lot, online-only auction is an assemblage of autographed documents, rare books, relics and manuscripts. The catalog can be viewed now, at www.universityarchives.com, with internet bidding provided by Invaluable.com. The sale is packed with important, scarce and collectible signed documents and other items relating to some of the most revered names in all of history. 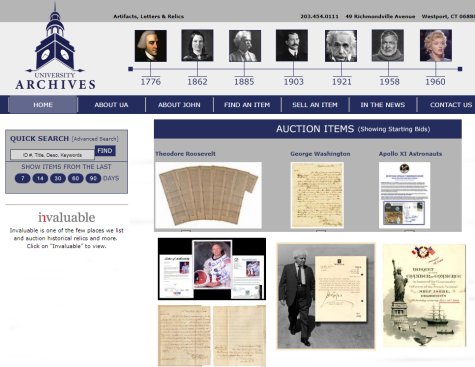 “The scope of this auction is unrivaled and is inclusive of an incredible selection of important autographs, spanning from the presidential and the military to the literary world,” said John Reznikoff, the founder and president of University Archives based in Westport. “The selection ranges from Jefferson and Lincoln to Obama and Bush to Charles Dickens to Albert Einstein.”

The auction will feature rare and spectacular artifacts from significant trailblazers in both history and the arts. These include cigars owned by Fidel Castro, Andy Warhol’s personally owned watch, Ronald Reagan’s Mont Blanc pen, Kennedy’s chair and strands of Washington’s hair. “We even have presidential doodles,” Reznikoff said. “There truly is something for everybody.”

Two lots relating to Presidents Obama and Bush carry identical estimates of $3,000-$4,000. The Obama lot is a list of inspiring thoughts, handwritten by the president on the back of his personal gym workout sheet. The Bush lot is an enormous heavy nylon American flag that flew from the Capitol building during his presidency. The flag measures 9 feet 5 inches by 4 feet 11 inches.

A display of strands of George and Martha Washington’s hair, housed in an ornate circular floral frame, with separate engravings of the couple and an impeccable provenance, is expected to rise to $60,000-$80,000; while a letter written and signed by Thomas Jefferson to his cousin George Jefferson, Jr. in 1811, in which he discusses recent tobacco prices, should realize $6,000-$7,000.

A wooden box of Cuban cigars, signed by Fidel Castro, who gifted the box to the philanthropist Dr. Eva Haller, with a photo of Castro signing the box while standing next to Dr. Haller, should hit $12,000-$14,000. Also, Andy Warhol’s personally owned Elgin pocket watch, gold-plated, previously sold at Sotheby’s Warhol estate sale 30 years ago, has an estimate of $8,000-$10,000.

JFK collectibles are always a hit with collectors. Up for bid is the rustic Kennedy family-owned rocking chair, last sold in Sotheby’s “Property from Kennedy Family Homes” sale. It’s expected to fetch $2,000-$3,000; while a photo of then-President Kennedy, taken at the swearing-in of his secretary, Mary Barelli Gallagher, inscribed to her by Kennedy, should command $2,400-$3,000.

Mont Blanc pens are desirable anyway, but this auction features Ronald Reagan’s owned (and well-used) Mont Blanc solitaire pinstripe vermeil gold-finished roller ball pen, engraved with his name (est. $8,000-$10,000). Also, a three-page legal brief, penned in 1850 by Abraham Lincoln while he was still an Illinois lawyer, signed by the future president, should make $7,000-$8,000.

A two-page letter, handwritten and signed by Charles Dickens in 1866, to Marguerite Agnes Power, his friend and peer (also a writer), wherein he mentions his latest poem, The Vines, has an estimate of $1,500-$2,000. Also, the signature of Albert Einstein on a blank page, pinned to an autograph album page and grouped with a color photo of Einstein, should garner $800-$900.

John Reznikoff started collecting in 1968, while in the third grade, and in 1979 he formed the company he runs today, University Archives, a division of University Stamp Co. Industry-wide, Reznikoff is considered the leading authenticity expert for manuscripts and documents and he consults with law enforcement, dealers, auction houses and both major authentication companies.