No auction known provides a more comprehensive study of Muhammad Ali – considered one of the most influential figures in modern American history — than Heritage Auctions’ The Muhammad Ali Greatest Collectionauction Sept. 30. The special presentation auction is now open for bidding at HA.com/7180 and closing in Extended Bidding format Sept. 30.

“We are honored to offer The Muhammad Ali Greatest Collection because it presents the man as both an athlete and a cultural icon,” said Chris Ivy, Director of Sports Auctions at Heritage. “Ali was larger than life and this auction shows his vast impact on America and on the world.” 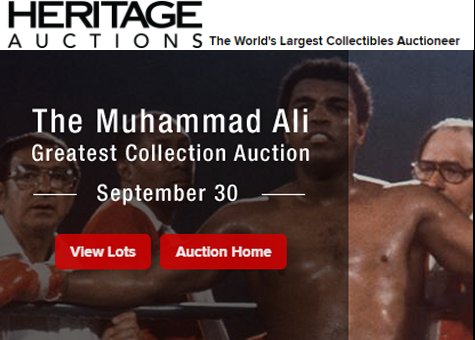 Thousands of individual items are on offer, representing a labor of love of one of Ali’s greatest fans.  Voluminous and comprehensive, this assembly took decades to compile, and will now once again be spread to the winds of the collecting community.

The collection was carefully curated with an eye toward elite significance, with highlights ranging from Ali’s Worn Training Trunks for the 1975 Thrilla in Manilla fight (est. $60,000+) to the 1971 Worn Training Robe for his first bout against Joe Frazier ($6,000+).

“The collection is amazingly comprehensive and ready for any collecting budget,” Ivy adds. “It’s got programs, tickets and posters for just about every fight.”