As Derek Jeter prepares for the final game of his celebrated 20-year career on Sunday night in Boston, Small Traditions LLC invites you to visit its Exclusive Derek Jeter Farewell Auction and to take a visual tour through The Captain’s remarkable career on cardboard.

Showcasing many of the finest Derek Jeter cards and autographs in existence, bidders will also find a truly staggering and once-in-a-lifetime assortment of several hundred extremely high-end Derek Jeter rookie cards, inserts, and autographs valued in the $200 to $500 range, currently selling for huge, no-reserve bargains in just the $10 to $50 range.

Finally, Yankees and other baseball fans will also enjoy browsing the auction for an almost Rolodex-like presentation of graded rookie cards, inserts, standard issues, and certified autographs from scores of other familiar players who’ve proudly worn the pinstripes at some time in their careers, from Babe Ruth to Dellin Betances.

The auction is currently open and will be closing this Saturday night 9/27 at smalltraditions.com.

With so many significant Derek Jeter items coming to market this month here and elsewhere, we thought that a revised list of our “10 Important Things To Know About Collecting The Captain” from JeterCards.com might come in handy, especially for those who want to better understand his many different types of cards produced over the last 23 yeras — rookies, proofs, parallels, oddballs, inserts, autographs, Refractors, etc. — and which are the most valuable. Paragraphs 1 through 5 discuss Jeter’s legacy, while 6 through 10 explain the cards, with key points in highlights for those who like to skim. 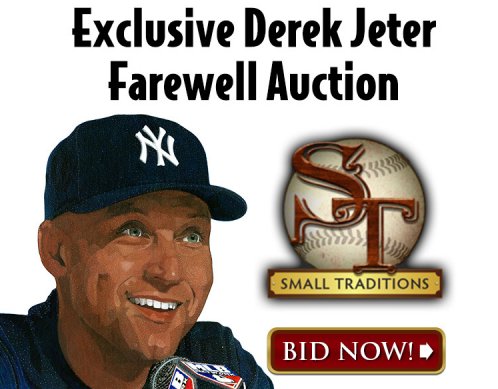 10 Important Things To Know About Collecting The Captain:

1. Derek Jeter has accomplished all of the following (see #s 2-10) without any remote suspicion of using Performance Enhancing Drugs. Quite the opposite, the mission of Jeter’s Turn 2 Foundation is to “motivate young people to turn away from drugs and alcohol and ‘TURN 2? healthy lifestyles.” Just as his perennial postseason heroics in the late 90s helped baseball’s popularity to recover from the embarrassment of the strike-shortened 1994 season, Jeter’s consistently clean and classy style of play has helped to preserve the integrity of the National Pastime throughout its steroid era.

2. Some of his pinstripe predecessors might have won more World Series rings than Jeter’s 5 — Yogi has 10, DiMaggio 9, Mantle and Ruth both 7 — but Mr. November has more postseason batting records than any other player, not just in the Yankees’ books but in all of baseball history. Keeping in mind that baseball only played one round of playoffs until 1969 and that it now plays three, Jeter is the all-time postseason hitting leader in ten categories, including hits (200), runs (111), total bases (302), singles (143), doubles (32), triples (5), games played (158), at bats (650), and plate appearances (734). He ranks third in postseason home runs (20), fourth in postseason RBI (61), fifth in postseason walks (66), and sixth in postseason stolen bases (18). His postseason numbers represent an entire season’s worth of games, and a very good season at that. And for those who say hooey to postseason records, then consider that Derek is also one of just two players to ever accumulate 3,000 hits, 250 home runs, 300 stolen bases, and 1,200 RBI in the history of the game. The other player? Willie Mays.

3. Derek is one of just 28 players in baseball’s elite 3,000 hit club. He achieved his 3,000th hit on the biggest stage in baseball and with more pomp than any other player before him, hitting a home run off one of the best pitchers in baseball, going 5-5 on the day, and driving in the game’s winning run, a performance that will be remembered and replayed forever.

4. And the hits didn’t stop there. This summer, Derek passed the immortal Honus Wagner for most hits ever by a shortstop, and then he passed Adrian “Cap” Anson to earn the #6 spot on baseball’s all-time hits leaders list. Those who will remain ahead of him in the top five are Tris Speaker, Stan Musial, Hank Aaron, Ty Cobb, and Pete Rose. That’s not just good company he’s in; it’s the greatest ever. What is perhaps most remarkable about Jeter’s standing among these players, however, is that Speaker and Musial both played 22 seasons, Aaron played 23, and Cobb and Rose both played 24. Jeter, just 20. His way, and on his terms.

5. In short, Derek Jeter is one of baseball’s all-time greats, and we’ve been more than lucky to watch his career. His famous “flip” play in the bottom of the seventh inning in Game 3 of the 2001 ALDS, his gutsy “dive” into the stands against the Red Sox, and his clutch hitting and never-ever-hesitating hustle will be highlights for the eternity of baseball. He stands in direct lineage to those who wore single-digit NY Yankee jerseys before him: 9, 8, 7, 6, 5, 4, 3, and 1. Like all these legends in pinstripes, Derek’s legacy will only continue to grow after he retires, bridging the generation gap as only baseball can do, as millions of fans face the existential question: will there really ever be another like him?

6. Drafted straight out of Kalamazoo Central High School and quickly becoming one of the most touted prospects in Yankee history, Derek can be found on 325 different baseball cards produced between his draft year of 1992 and his rookie season of 1996, and there is considerable debate about whether or not all of these cards should be considered rookie cards. His traditional rookie card year has always been 1993, but collecting has changed in recent years, and most collectors are now more inclined to pursue his many more challenging cards produced during his ROY-winning season of 1996, when we watched with wonder as the rookie helped lead the Yankees to their first World Series Championship in nearly two decades, than to collect only his cards from 1993, when he batted .295 in his first full season of Single A, still three seasons away from his official MLB rookie season.

7. Jeter’s rookie years of 1992 to 1996 correspond to the hobby development of insert or “chase” cards — special, limited edition cards randomly inserted into packs, many of which were super-short-printed variations, or parallel versions, of a player’s regular or base card. Moreover, his rookie season of 1996 would be the first year that saw products with significantly more than the two basic tiers of print runs that had thus far characterized the insert card development of the early to mid 1990s. Instead of products with just a regularly issued card and a single parallel insert of that regular issue — like Finest Refractors, Topps Gold, and Upper Deck Electric Diamond, for example — there were now products by Bowman, Leaf, and Select Certified that had as many as a half dozen different parallels, each one produced in smaller quantities than the last, some with print runs as small as just 30. Scarcer than even the T206 Wagner, cards like the famous 1996 Select Certified Mirror Gold are also some of the most beautiful cards ever made. Their development happened during Derek’s rookie season, which makes collecting his rookie season cards that much more challenging and fun.

8. If 1992-1996 is the birth of modern insert cards, then 1997-1999 is their renaissance or golden age. During the late ’90s, modern card manufacturers developed several more innovations that now, two decades later, still dominate the industry. These innovations included game-used cards, serial-numbered cards, and the development of the ever coveted 1/1 or one-of-one masterpiece cards, when manufacturers produced an ultimate parallel of a particular card limited to just one single copy made. Finally, let’s also not forget the incredible die-cut cards developed during the period, which may be common encounters in packs today, but in the late 90s they were among the most special pulls imaginable, some of which have remained non-existent in PSA 10 Gem Mint condition and were so intricate and cutting-edge — ha! — that they will most likely always will.

9. Just as the development of insert cards corresponded with Derek’s rookie years of 1992 to 1996, this distinct period of later 1990s inserts directly corresponds to the New York Yankees dynasty years of 1996 to 2000. Game-used and serial-numbered autograph cards, and even 1/1 cards, are now extremely common in today’s products, but in the late 90s they were new and exciting, as was the printing technology that had made them possible, and they remain among the most collected cards in the hobby. For Yankees fans and for those who collect The Captain, the appeal of collecting cards from these years is therefore twofold, since so many of the innovative cards from these years were groundbreaking, and since they also document one of the last real dynasties in the history of the game.

10. Finally, let’s not forget that Derek has played his entire 20-year career with the most successful franchise in all of sports history and with all of us watching as closely as New York City watches anything, and he’s done it all with class, integrity, and grace. For this reason, wherever the Yankees have traveled during his farewell season, millions of fans have stood in ovation, and thousands more have held signs saying “Thank You.” But thank you for what? For the memories? Sure. And for the championships? Yes, of course. But the thanks we owe Derek Jeter have as much if not more to do with those three little words — class, integrity, and grace — than with anything. I’m not even sure what those things are these days, but I know that I’ve seen them whenever I’ve watched Derek play, and for that I will always be grateful. Derek’s retirement announcement earlier this year took many of us by surprise, but it was in reality the ultimate classy act. Knowing that this would be his last season has helped him to pace and to preserve himself, and I’d certainly rather watch him with the knowledge of his retirement than to see him slowly decline over the next several seasons, even if those additional years could have brought him greater personal achievements, namely, the all-time hits record. But Derek doesn’t play for personal records, and he never has. He plays for wins, and that’s how he’ll be remembered. Although there were others before him and there will be many more to follow, years and years from now, he’ll be remembered best by his most common nickname: The Captain.