Small Traditions LLC invites holiday shoppers to consider nearly 300 high-end lots in its 3rd Annual Holiday Premium Auction. The online event kicked off this past weekend and will run through next week, on Saturday night 12/5. Highlights from the auction include the following: 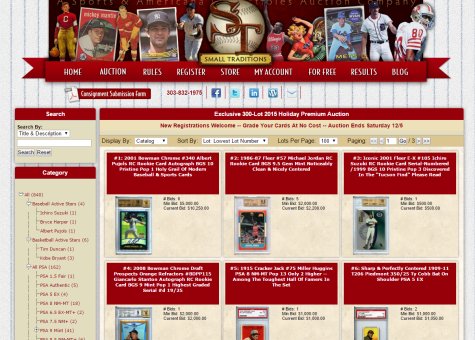 The signed HOF baseball collection was meticulously compiled by a local USPS mailman in Denver who assembled and handled the balls using the same care and respect with which he handled his route, whether in rain, snow, heat of day or gloom of night, for nearly 30 years. The consignor handled the balls only when wearing rubber gloves, a practice which Small Traditions continued when processing the collection, and the balls therefore have never been touched with human hands by any others than those who may previously have owned them or those who penned their iconic scripts to them, along with an overwhelming number of inscriptions, which characterize the collection. As any layperson can plainly see, the collection is also characterized by an obsessive attention to condition as well as impeccable provenance. Each and every ball has been authenticated and graded by PSA/DNA

2. Iconic 2001 Bowman Chrome #347 Albert Pujols Autograph RC BGS 10 Pristine Pop 1
The single highest graded specimen from approximately 400 of these iconic cards believed to exist, and widely considered to be the single most significant modern baseball card in existence. The card has been listed with a moderate reserve that is within range of its previous selling price in the Gem Mint 9.5 grade. The offered card is the only BGS 10 Pristine ever graded.

5. A Sampling From the “Tucson Find”

Small Traditions 3rd Annual Premium Holiday Auction also contains a small sampling from the recent Tucson find, a staggering collection of nearly 4,000 different sports card albums, each housing meticulously hand-collated sets dating from the 1940s through the early 2000s. The remarkably well-preserved collection made headlines over the summer when it yielded the second-ever 1953 Topps Mickey Mantle card to grade PSA 10 Gem Mint, and which was reported to have sold for nearly $2 million. Small Traditions LLC has been contracted to help sort and grade the post-1980 portion of the collection, which the company spent much of the month of November organizing and transporting from Arizona to Denver. The Holiday Premium Auction features a minuscule fraction of the Tucson Find. The vast majority of the PSA graded cards that have been culled from the collection, as well as a near countless number of complete sets, will begin to be offered over the holiday season on eBay and in the Small Traditions Store, where collectors can list their items for free while keeping them in their possession, paying just 9.5% on successful sales after confirmed delivery. Selections from the collection will then head to auction in the company’s regular Monthly Masterpieces Plus events in January and February.

Small Traditions LLC also invites interested collectors to consider consigning at 0% to its full calendar of monthly auctions for 2016, which will see the Denver-based company’s fifth year of auction operations. The company also invites consignors to consider its popular Cost-Free Grading promotion, through which consignors may submit up to 100 raw cards for consultation with Small Traditions and grading with PSA. Small Traditions covers all grading expenses up front and subtracts grading fees for qualified material only after eventual auction sales.