Small Traditions special all-vintage baseball auction, which features 100s of PSA-graded cards from the 50s and 60s and pre-war period, as well as dozens of autographs, programs and scorecards is in progress and concludes on January 23, 2016. Bid, view and register for this auction at smalltraditions.com.

ighlighting over 650 vintage baseball lots in our current Vintage Baseball New Year’s Auction, we are breaking up one of the finest 1965 Kahn’s Wieners collections in existence. With 27 of the 45 cards graded PSA 10 Gem Mint, including Pete Rose and Hall of Famers Frank Robinson, Willie Stargell and Bill Mazeroski, the no-reserve auction presents interested bidders with the unique opportunity to claim (or to defend, for good) the #1 current and all-time finest positions on the hotly contested PSA Set Registry leader board. Opportunities like this are as rare as the popular Kahn’s cards themselves in Gem Mint 10 condition, so bid early, and bid often.

Another offering with PSA Set Registry leader board implications, the auction contains several dozen PSA 9 graded cards from the challenging 1971 Kellogg’s set. Offered are several of the set’s toughest error variations, including Sam McDowell, which ranks as the one and only example ever graded PSA 9 Mint.

In addition to 600+ other vintage baseball cards graded by PSA, with an abundance of Hall of Famer and rookie cards ranging in grades across the spectrum and ranging in years from the early 20th century to the 1970s, the auction also contains several dozen PSA/DNA certified and slabbed signed index cards from players active in the 1940s and 1950s as well as several dozen PSA-graded signed Hall of Fame baseballs.

The auction is now open for bidding and will close next Saturday evening, January the 23rd. New bidders are invited to register here.

Within hours of closing our Vintage Baseball New Year’s Auction, Small Traditions will pull back the curtain on our highly anticipated Super Bowl 50 Auction. Highlighted by hundreds of PSA-graded football Hall of Famer and rookie cards, including dozens of each Tom Brady and Peyton Manning, the auction will close on the evening of Saturday 2/6 of Super Bowl weekend. 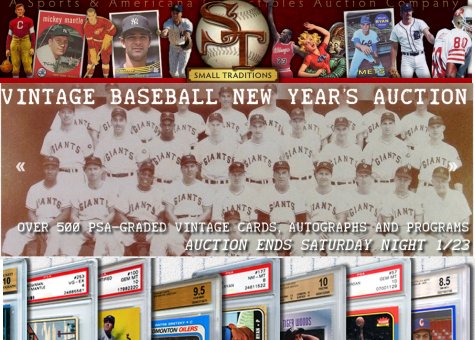 Small Traditions invites interested consignors to take advantage of our Cost-Free Grading promotion and 0% listing rates for its March Madness Basketball Auction and Spring Baseball events. Submit up to 100 of your best cards for consideration for grading with PSA and/or BGS, and don’t pay a single penny out of pocket.

Small Traditions will help to screen your cards for grading candidacy, and we will pay all grading, handling and insurance fees up front, subtracting only the grading fees after the successful auction of your cards at a 0% seller’s rate. For those seeking assistance with collections of over 100 cards, however, we charge a modest collection management fee of 10-20% and will gladly travel to visit with collectors in their homes to help assess their cardboard hordes.