Sotheby’s and Goldin Auctions are pleased to announce A Century of Champions, an unparalleled collection of sports memorabilia spanning the past 100 years of global sporting history. The online auction, open for bidding 24 November – 3 December via sothebys.com, will feature approximately 100 lots representing an international array of iconic memorabilia, including jerseys, sneakers, trading cards, and other objects from renowned athletes, past and present, across baseball, basketball, football, soccer, tennis, boxing, hockey, and more. Among the marquee athletes featured in the sale include Tom Brady, Wayne Gretzky, LeBron James, Pelé, Rafael Nadal, Babe Ruth, Mickey Mantle, Muhammad Ali, and Kobe Bryant, with many more consigning directly to the auction.

The partnership with Goldin is the first dedicated sports memorabilia sale at Sotheby’s since 2008. Sotheby’s has a long history of auctioning artifacts from sporting history, including James Naismith’s founding rules of basketball, which achieved $4.3 million in 2010; the baseball bat used by Babe Ruth to hit the first home run on Grand Opening Day of the New Yankee Stadium, April 16, 1923, which sold for $1.25 million in 2004; a handwritten 1857 pamphlet of the oldest soccer rulebook from the archives of Sheffield FC, which sold for $1.4 million in 2011; the 2005 sale of the 1919 contract selling Babe Ruth from the Boston Red Sox to the New York Yankees for $996,000, then a record for a sports contract; and Pierre de Coubertin’s 1892 Olympic Manifesto, which sold in December 2019 for $8.8 million, the current world auction record for sports memorabilia. 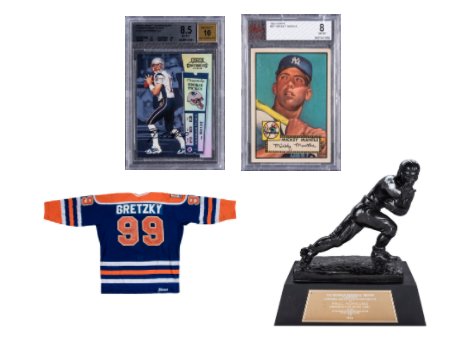 Richard Austin, Sotheby’s Head of Books & Manuscripts in New York, said: “We are excited to partner with Goldin Auctions on this exceptional and unique online sale, and to present a world class collection of sports memorabilia from champion athletes who not only represent the pinnacle of their respective games, but who are also cultural icons in their own right. Sotheby’s has a long history of bringing the highest quality sports memorabilia and historical objects to auction, and this partnership allows us to continue to expand on that legacy and embrace a growing collector category.”

Ken Goldin, Goldin Auctions Founder & CEO, commented: “This auction is the first of its kind for Goldin, and we are thrilled to present this sale with a partner like Sotheby’s, whose reputation and legacy is unmatched in the world of auctions. 2020 has been a banner year for our business, as we became the only dedicated sports auction house to exceed $100 million in annual GMV this year. To present a sale like this at Sotheby’s is the perfect platform for us to showcase the quality and depth of memorabilia our company is known for, and to engage with a whole new audience. I am particularly grateful that so many athletes and their families, who I have had relationships with for many years, are participating directly as consignors to this auction, including the Mickey Mantle Family, Emmitt Smith, Cal Ripken Jr., Reggie Jackson and many others.”

A CENTURY OF CHAMPIONS

Spanning nearly 100 years of global sporting history and encompassing a truly international range of sports, this special online auction encompasses historical pieces across baseball, basketball, football, soccer, tennis, boxing, hockey, and more. With such a comprehensive selection, the auction will feature prized memorabilia, artifacts and autographs from many of the most iconic and legendary names in sports history.

Leading the sale is the 1970 Jules Rimet Trophy presented to Edison Arantes do Nascimento, better known as Pelé (estimate $650/800,000), the Brazilian soccer sensation who was voted Football Player of the Century by the International Federation of Football History & Statistics (IFFHS), following Brazil’s win over Italy to seal a World Cup championship. Pele´’s 1970 Jules Rimet trophy was presented to the legend after winning his 3rd World Cup title with Brazil, and he remains the only player to win three titles. The Brazilian National Soccer Team became the first national team to win three World Cup titles with a definitive 4-1 victory over fellow two-time winners Italy at Estadio Azteca to close out the 1970 FIFA World Cup In Mexico. The 1970 World Cup was the last time the Jules Rimet Trophy was awarded, as FIFA retired the trophy and the iconic silverware, and is fitting cap to arguable the greatest run by a national team, winning three World Cups in 12 years.

Among the many highlights in the sale is the 2000 Playoff Contenders “Championship Rookie Ticket” #144 Tom Brady signed rookie card (#025/100) (estimate $250/300,000). The future Hall of Fame quarterback and six-time Super Bowl winner is seen here in an extremely desirable rookie card appearance, complete with an outstanding, black ink signature on the obverse of this fundamentally uncirculated collectible. This card is encapsulated and graded NM-MT 8.5 by BGS, with signature graded “10” by Beckett. The card hails from a tremendously popular release, and stands as a key entry in the entire span of Playoff Contenders “Ticket” production. The card’s BGS condition report: Centering: 10, Corners: 8.5, Edges: 8.5, Surface: 8. The limited-edition piece is serial-numbered “025/100.” An outstanding Brady commemorative, in Near Mint to Mint-plus condition.

One of the most revered baseball players and New York Yankees of all time, the sale also features the highly coveted 1952 Topps #311 Mickey Mantle rookie card (estimate $150/200,000)—one of the most desirable baseball cards ever made and Mantle’s most revered and in-demand rookie card appearance. This outstanding card delivers preservation quality to match its mystique. Its corners form precise right angles, and only a faint trace of wear at the upper right likely kept this piece from an even more favorable grading assessment. A virtually flawless, glistening surface announces the card’s presence to the eyes. he card’s reverse is well aligned. Here, we see one of the most impressive and valuable individual pieces in our entire hobby. This is an extremely high-end example, with tremendous visual appeal. Strong Near Mint to Mint condition.

The auction is distinguished by what is considered by Holy Grail of hockey jerseys: the 1979-80 Edmonton Oilers rookie season road jersey signed and worn by hockey’s greatest player, “the great one,” Wayne Gretzky (estimate $450/600,000). Gretzky’s impact on the NHL was immediate, and he would win the Hart Trophy, the NHL equivalent to the league MVP, eight straight years while turning the Oilers’ franchise into a juggernaut that ruled the 1980s. As a 19-year-old, Gretzky blitzed the NHL in his first year with 51 goals and a league-leading 86 assists and 137 points. Unlike baseball or football, photo matching vintage hockey jerseys is more challenging, however the experts at The MeiGray Group have found two photo matches of Gretzky wearing this jersey during his very first season in the NHL. The jersey comes with an LOA from The MeiGray Group for the game use and a LOA from JSA for the signature.

To commemorate the 100th anniversary of the national pastime in 1939, ceremonies and events were held across America, but none was as special as the opening of the Baseball Hall of Fame in Cooperstown, New York. Beginning in 1936, sportswriters were asked to vote for the players who they deemed the greatest of all-time, and the first ballot elected Babe Ruth, Ty Cobb, Christy Mathewson, Walter Johnson, and Honus Wagner. More of the game’s legends were added over the years, and on June 12, 1939 the Hall of Fame officially opened its doors in Cooperstown. The event coincided with a first day cover featuring a new stamp mailed from Cooperstown, and the present issue includes signatures from no less than 10 first-rank Hall of Famers, among them Ty Cobb, Grover Cleveland Alexander, Connie Mack, Cy Young, Walter Johnson, Larry Lajoie, Honus Wagner, Tris Speaker, and Babe Ruth (estimate $250/350,000). This collection of Hall of Fame greats has been graded AUTHENTIC and encapsulated by PSA/DNA.