In the early 1960s, a 12-year-old boy from a working-class Philadelphia neighborhood got on his Schwinn bicycle and rode to the local drug store on a family errand. There, while waiting for a prescription to be filled, he wandered over to the small rack of comic books and saw something that he had not seen before. On the rack, among the usual choice of Disney’s, Archie’s, Dell Tarzan’s and Westerns, was something completely new to his experience: a SUPERHERO! Whether it was Spidey, Hulk or the Fantastic Four at the time is a faded memory to him. What was significant about that particular day, in that particular drug store, is the fact that once he opened the first page and started reading, he was hooked!! 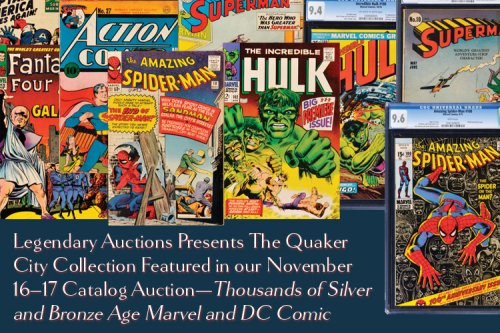 For the next 30 years or so, he was a certifiable comic book junkie, not only buying comics off the racks at a feverish pace, but also working in comic book stores, attending comic book conventions and trading with other like-minded collectors. The collection grew and grew, and by the time he stopped collecting in the early 1990s, the hundreds of comic and magazine storage boxes contained over 50,000 books, which filled two bedrooms in his house and parts of his basement as well.

In addition to being a somewhat fanatical collector, our consignor was a condition fanatic. Each and every book was stored in sandwich bags in the early days, and later in comic bags with backing boards. While the preponderance of books from the mid to late-1960s and forward were mostly in newsstand-fresh condition, many of the earlier issues were read and re-read many times over, showing the wear and tear of a passionate early collector.

The collection is basically complete in Marvels from the first Fantastic Four and forward, and in DCs from the late 10-cent and early 12-cent time period, too. There are also some Golden Age superhero books in the mix, as well as other company titles as well: Marvel/Atlas, Gold Key, Archie, etc.

Legendary Auctions is proud to offer what was effectively Mickey Mantle’s personal card collection—Featured in our November 16–17 Catalog Auction.

Our consignor was a dear friend of “The Mick” and his business partner in Mantle’s Restaurant in New York City. Mantle stayed at the New York Regency hotel on Park Avenue when he was in New York and brought this collection of cards to show his friend when they were deciding what to put in the restaurant. When it was decided not to display the cards at the restaurant they were displayed in his suite at the hotel until finally he gifted them to his business partner.

With all the opportunities Mickey had to retain baseball cards it is interesting to see that his collection was both the “Who’s Who” of the Yankees with the likes of Ruth, Gehrig and DiMaggio as well as the “Who’s Who” of major leaguers as the collection represented over a dozen players who would land in the Hall of Fame. The only two cards that do not represent HOF inductees were his teammates Maris and Martin. 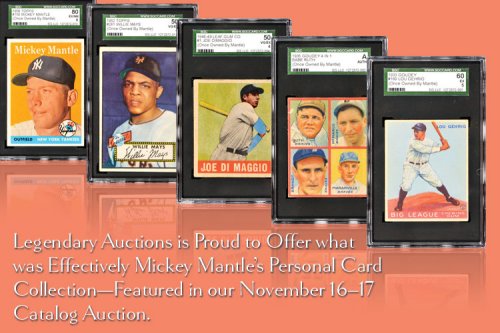 With the diverse selection we are pleased that this collection will offer a number of collectors the opportunity to add a card to their collection that was once owned by they King of Cardboard Mickey Mantle! Each card has been encapsulted by SGC after providing them the appropriate provenance. It is important to note that this collection consists of all the cards held by this close Mantle confidant.