To show how much baseball has changed over the course of time, consider that when Babe Ruth signed his most lucrative contract in 1930, he became the first ballplayer to earn a higher yearly salary than the President of the United States (Ruth jokingly explained “I had a better year than he did”). In today’s dollars, that $80,000 contract translates to just over one million dollars, which is barely 20% of the major league average, and now EVERY player in the league earns more than the President.

And still it doesn’t appear to be enough for some of today’s athletes, who often use their spare time attending card shows or other public events to sell their autograph to collectors. While legends like Babe, Gehrig and others brought in extra income from barnstorming the west half of the United States during the off-season, they were applauded for providing an exhibition of their talents to areas of the country who didn’t otherwise have the opportunity to see him in person. But Babe Ruth never dreamed of selling his autograph; he happily gave it away to a young fan, a friend or a business associate. The featured ball has been passed down through the family of our consignor, starting with a prominent sports executive with whom “The Bambino” had a close friendship. 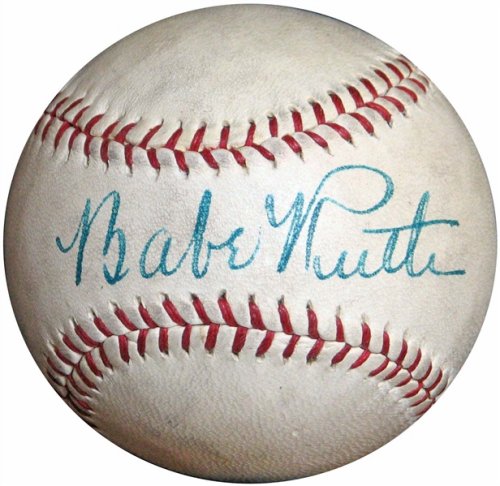 Without the pressures of rushing to accommodate a mob of starry-eyed children clamoring for an autograph, Babe clearly had the time to take extra care in crafting a virtually perfect fountain pen signature on this Reach Special League ball, commanding the sweet spot with a large and boldly penned autograph that grades a very impressive 8 by SGC.

The sphere that houses the signature is equally well-preserved, showing only light touches of toning and wear that are inevitable for a piece that flirts with a century of age. If acquiring a single-signed Babe Ruth ball has been a priority on your bucket list, this ranks near the top of the list as one of the finest we’ve come across. LOA from JSA and SGC.