Baseball, the Stanley Cup Playoffs and balmy golf course weather are all signs that it’s time for Grey Flannel’s annual Summer Games Auction, which perennially features the finest in game-used memorabilia from all major sports. This year’s Summer Games lineup is available to view online now, with Internet and absentee bidding running through Wednesday, June 5th. 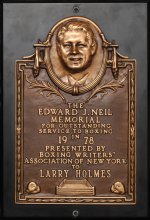 Over 750 lots are included in the 2013 Summer Games catalog, with an especially strong selection of baseball apparel heading the Premier section of the sale. No time is wasted in getting the auction off to a bang. Lot #1 features a 1947 Mel Ott New York Giants player/manager’s worn road jersey with pristine provenance.

This Mel Ott rare “gamer” is accompanied by documentation from the consignor’s father, who was the general manager of the Burlington City Giants, a Minor League affiliate of the New York Giants. A $25,000 reserve accompanies this rare piece of baseball history.

Several desirable New York Yankees player jerseys will be auctioned, including a Derek Jeter game-used home jersey photomatched to three Red Sox games from October 2012. Accompanied by a LOA from Yankees-Steiner, the jersey from the Yankee Captain makes its appearance at auction with a minimum bid of $2,500.

Legendary Yankee slugger and Hall of Famer Mickey Mantle signed his first $100,000 contract with New York in 1963. In so doing, he tied the immortal 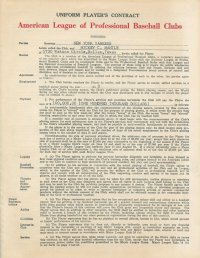 Joe DiMaggio as the highest-paid Yankee ballplayer in history up to that time. What is believed to be the team’s copy of the actual player’s contract Mantle signed in reaching that monetary milestone is entered as Lot 75 in Grey Flannel’s sale. Mantle’s signature on the four-page document is JSA authenticated, and it is further backed by a LOA from PSA/DNA. A bonus item accompanying the contract is a Feb. 27, 1963 press release on Yankees stationery announcing that the Yankees and Mantle had come to terms on a new contract. The reserve on this lot is $5,000.

A superb selection of more than two dozen awards, signed balls, apparel and jewelry associated with basketball superstar “Pistol” Pete Maravich will be auctioned by Grey Flannel. Items range from the first basketball Maravich ever used as a boy ($2,500 reserve) to a late-1960s LSU shooting shirt ($5,000 reserve), which he wore during the period that he was making his indelible mark on NCAA history as a trailblazing jump shooter and genius of offensive play. Many of the Maravich lots are accompanied by LOAs from Pistol Pete’s family, including the important gold ring he received at his 1987 induction to the Naismith Memorial Basketball Hall of Fame. Its reserve is $10,000.

Boxing fans can relive some the greatest moments in Heavyweight Champion Larry Holmes’ career through an archive that came straight from “The Easton Assassin’s” home. Many of the items have coveted additional provenance: a photo of Holmes holding the actual auction article. Among the highlights of this unique and very personal archive are the Edward J. Neil Memorial plaque awarded to Holmes in 1978 by the Boxing Writers’ Association of New York ($2,500 reserve), and the WBC Heavyweight World Championship Belt Holmes earned that same year when he defeated Ken Norton in Las Vegas ($2,500). The impressive green leather championship belt with a massive, decorative center medallion was signed by Holmes in black felt-tipped marker: “My original WBC belt – Larry Holmes.”

The football section of the sale includes an historic award, as well – Jim Brown’s 1957 NFL Rookie of the Year Trophy. “It’s hard to believe, but 55 years later, Jim Brown still holds the record for total seasons leading the NFL in all-purpose yards, and he’s the only rusher in NFL history to average over 100 yards per game for a career. He was an astonishing talent, and it was obvious from the moment he came out of the gate in his rookie year,” said Richard Russek. Offered with a photo of Brown holding the award, the lot is entered in the sale with a $5,000 reserve. 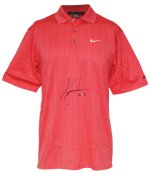 Professional golf is grabbing the spotlight as more and more talented young players take to the links, but no one has forgotten that the first prodigy to draw attention to the game was Tiger Woods. On June 5th, Grey Flannel presents a true rarity – the only Masters Tournament final-day “red shirt” ever to appear at auction, and the very one worn by Tiger Woods in 2006 as he sought his fifth green jacket at Augusta. The shirt is autographed by Woods and has ironclad UDA provenance. The lot includes a photo of Woods wearing the red shirt. Reserve: $5,000.

Each lot in the sale will pass to its new owner with a certificate of authenticity from Grey Flannel Auctions, whose commitment to authenticity goes back more than two decades. The company serves as the official appraiser and authenticator for the Naismith Memorial Basketball Hall of Fame and are currently marketing partners of the Major League Baseball Players Alumni Association, NFL Alumni, National Basketball Retired Players Association and The Babe Ruth Birthplace and Sports Legends Museum.

Bidding in Grey Flannel’s Summer Games Catalog Auction will close on June 5, 2013. All forms of absentee bids are accepted, including by phone and online through Grey Flannel’s website at www.GreyFlannelAuctions.com.

Printed catalogs are free to all registered bidders while supplies last. The fully illustrated online catalog can be viewed at www.GreyFlannelAuctions.com. For additional information, call 631-288-7800, ext. 223; or email info@greyflannelauctions.com.