One of the world’s top collections of baseball and other sports cards, curated by the late Dr. Thomas Newman, is now on the auction block.  The auction will consist of over 1,000 lots in all, with bidding in progress and concluding on July  10, 2021.  Bidding is now open at memoraylaneinc.com!

In a perfect world, Dr. Thomas Newman—“Tommy” to those who knew him the best—would be enjoying the start of a new season—and buying more baseball cards for his ever-growing collection. Sadly, the remarkable life of one of the top trading card and sports memorabilia hobbyists was unexpectedly cut short by COVID-19 in late January. A gifted neurologist who was still practicing in his hometown at age 73, the Tampa, Florida native had a lifelong passion for sports cards and sports memorabilia.

“He was a true collector,” recalled J.P. Cohen of Memory Lane Auctions, who would see his friend and client each year at the National Sports Collectors Convention. “If he paid $10,000 for a card he really wanted and a week later, someone offered him $50,000, he’d turn it down. He just had an unquenchable thirst for sports collectibles. He loved it all.”

Now, Dr. Newman’s collection—featuring high-grade examples of some of the hobby’s best and most iconic cards—will get a much-deserved spotlight when Memory Lane brings it to market in a special standalone auction in June. Cohen believes it could bring in more than $20 million.

The Newman collection will accommodate both the vintage and modern enthusiasts, covering a span of some 150 years with regard to the miraculous array of cards and memorabilia offered in a world class compilation.

The list of cards that will be available is what you’d expect to find in a hobby hall of fame, but one of them may well become the most valuable baseball card ever sold. Dr. Newman owned the highest graded example of the 1933 Goudey Babe Ruth #53. His PSA 9 stands alone in the population report—with none higher. It carries a $500,000 minimum bid but is expected to challenge the $5.2 million sale of a PSA 9 1952 Topps Mickey Mantle that made headlines in January. As for the ’52 Mantle—there’s one of those too– a PSA 8 that will likely be one of multiple seven-figure cards when bidding ends. 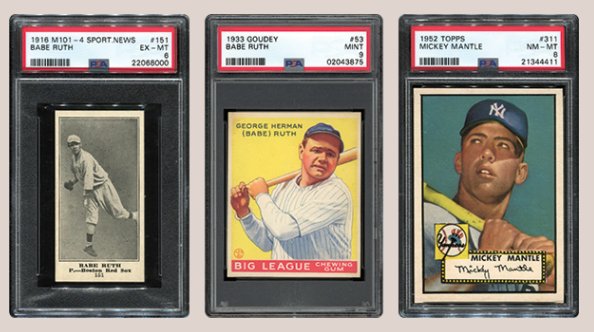 Top Lou Gehrig cards include a 1925 Exhibit rookie card graded PSA 5—one of just four at that level with three higher—as well as both Gehrig cards from the ’33 Goudey set, each graded PSA 8.

One of the most formidable Joe DiMaggio cards extant will be available for the taking. A miraculous “Pop 1” SGC 8.5 1936 World Wide Gum “true” rookie card of the Yankee Clipper proudly stands alone at the top of BOTH the SGC & PSA “Pop” charts, with its closest peer residing in a near-mint holder.

Dr. Newman wasn’t just a fan of single cards, though. Virtually every important baseball set from every era of collecting will be in the auction, including a 1915 Cracker Jack set that includes the original album designed to store them. Football and basketball? He collected those, too, and the auction will include his PSA 9 1948 Bowman George Mikan rookie card—another hobby titan that’s expected to bring a big price—and his PSA 7 1935 National Chicle Bronko Nagurski, the holy grail of vintage football (the rest of high high-grade set will also be part of the auction).

Aside from cards, the collection features a virtually complete run of World Series programs, including the 1903 publication—miraculously unrestored—from Game 3 in Boston and a rare 1908 program from one of the Cubs’ early appearances.