“That Yankee ball club would have murdered my Orioles,” Hall of Fame manager Wilbert Robinson told a reporter in 1928. “I was amazed at what they did to their league, and look what they did to the Pirates in the World Series. The Orioles never saw the day they could make runs against Huggins’ mob. And you go right out and tell the fans I said so.” Superstar outfielder for the second great Philadelphia A’s dynasty Al Simmons was equally realistic: “We were good, a really great team, but when you compare us with the great Yankee world champions who preceded us, we simply weren’t in their class. I’m not trying to kid myself nor anyone else. I fought those Yankees as hard as any man in the American League, but when they got us into a tough series, they just batted our brains out.” The ensuing eight decades have only served to burnish the star of a team that remains atop essentially every baseball historian’s list of the greatest ever. The 1927 New York Yankee s. Murderer’s Row. 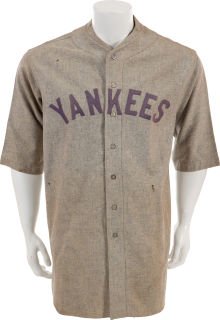 While the club’s brilliance was structured upon a foundation of unprecedented long ball exploits from Ruth and Gehrig, the remarkable success of the team was no two-man show, with famed manager Miller Huggins inspiring even his bit players to a new, higher level of achievement. Ably serving in his supporting role of Hall of Fame second baseman Tony Lazzeri was Ray Morehart, who, at seventy-three games, made more 1927 Yankees appearances than any other non-starter on that season’s roster. Morehart’s Major League career would conclude upon the final day of the 1927 regular season after two campaigns with the ChiSox (1924, 1926), assuring that this remarkable road grey flannel uniform, which will be offered in Heritage Auctions’ upcoming April 2012 Signature Auction, could only have been worn with the game’s greatest club.

The sturdy jersey represents not just a watershed moment in baseball history, but a rare

uniform style deviation for a team whose consistency over the decades is unmatched in professional sports. Since formally adopting the name “Yankees” in 1913 (after the team left its “Highlanders” moniker behind at Hilltop Park upon its move to the Polo Grounds), the words “New York” have arched gently across the chest on every road uniform to date save four — 1927 through 1930. Here we find the first appearance of the very rare “Yankees” variant, still firmly affixed in its gently faded navy felt. Jersey verso is blank, as the Yanks would introduce numbers in 1929. Proper “Spalding” label appears at interior collar, where an age-mellowed “Morehart” is embroidered directly into the flannel in red. The matching grey flannel pants are identically tagged and embroidered at interior waistband. Also here are the original stirrups, one bearing a vintage team repair.

Jersey and pants are 100% original and unaltered, even retaining all original buttons. It derives from the family and is accompanied by its letter of provenance. Also included is Morehart’s personal copy of his 1927 Yankees contract, signed by Jacob Ruppert and accompanied by his signed cover letter and mailing envelope.