Since 2009, the highest price realized at auction for a PSA 8 Roberto Clemente rookie was $6341 — until now. In the April 2013 SportsCardLink auction, this card sold for $8036, nearly $2,000 higher than the previous high. There are 20 other auction results recorded on VCP (vintagecardprices.com) for Clemente’s rookie card in PSA 8 since 2009, with the average price being $5413. So, in addition to being 27% higher than the previous auction high, it is $2600 or 48% over the previous average price realized at auction. 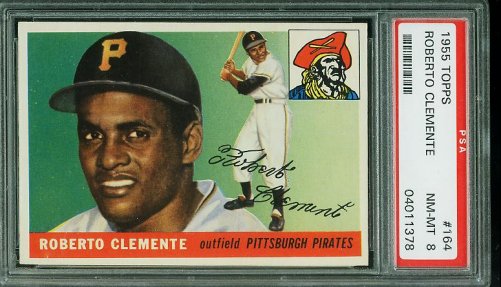 SportsCardLink is now accepting consignments of vintage sports cards for it’s Summer auction, which will commence in July, and offering a special deal for consignors to this auction. Combined with the ability of SportsCardLink to obtain great prices for its consignors, the firm is offering seller’s a 0% commission for the Summer auction, and has reduced it’s buyer premium to just 10%, even as it remains one of the few auction firms within the industry to accept credit cards from buyers.

Collectors or dealers interested in selling are encouraged to email their prospective auction list to buysell@sportscardlink.com or phone 617-517-0072.