Stan Musial, along with being “Baseball’s Perfect Knight,” and one of the greatest players to ever don a jersey, was many things: Devoted husband, father, autograph collector, harmonica player, origami enthusiast.  The contents of The Stan Musial Collection, consigned by the Musial family, and offered by Heritage Auctions as the centerpiece of its Nov. 7-9 Sports Collectibles Catalog Auction, offer an intriguing look behind the scenes at the life of one of the most decorated athletes in American sports history.

“This collection offers a very personal perspective on the most beloved St. Louis Cardinal to play for that storied franchise,” said Chris Ivy, Director of Sports Auctions at Heritage. “These are the mementos that the three-time World Champion and National League MVP chose to keep for himself. Now his legions of fans will have a chance to acquire something that was close to their hero.” 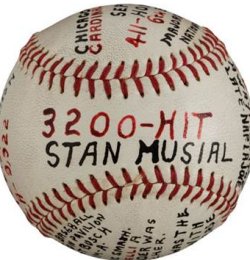 The range of material offered comes with a wide variety of price points aimed at giving all levels of collector a chance, from signed baseballs saved from Musial’s minor league days with the 1940 Daytona Beach Islanders to his rings from the 21st century St. Louis Cardinals National League and World Championships and everything in between.

“Some of the top highlights include the baseball uniform Musial wore as a member of the US Navy baseball team during World War II,” said Ivy, “and a baseball personally signed for him by iconic slugger Babe Ruth.”

The Nov. 7-9 auction also marks the largest catalog auction in the history of the sports genre at Heritage. The auction action will take place completely online, with no live “floor” session.

The catalog is currently open for bidding and is divided into three separate sessions, with trading cards the first session to close, in an Extended Bidding format, beginning at 10 pm CT, Thursday, Nov. 7.

The engaging assembly of offerings in Session One cuts across all eras, formats, sports and value ranges, with low-population common cards, high-grade condition rarities and top-ranked registry sets. Notable lots include the only known 1914-15 J.H. Dugan Calendar Cabinet Cards set, a solid mid-grade example of the exceedingly rare T206 Eddie Plank and another grouping from the famous “Black Swamp Find” of E98 caramel cards.

Session Two, closing in Extended Bidding format on Friday, Nov. 8, begins with The Stan Musial Collection and continues on to include the balance of the event’s high-end sports memorabilia offerings.

Autograph rarities on offer include a baseball signed by the 1910 World Champion Philadelphia Athletics, a fascinating handwritten letter of support from Ty Cobb to Stan Musial and an archive of love letters from Green Bay Packers founder Curly Lambeau to the woman in whose arms he would die in 1965. Direct from the arsenals of baseball’s top sluggers come game used bats once wielded by Rogers Hornsby, Hank Aaron, Willie Mays and more.

The Final Session, closing in Extended Bidding format on Saturday, Nov. 9, is comprised of more modestly-priced collectibles of all types, from trading cards to autographs and general ephemera.

Other highlights of this auction include:

Heritage Auctions, headed by Steve Ivy, Jim Halperin and Greg Rohan, is the world’s third largest auction house, with annual sales more than $800 million, and 800,000+ online bidder members. For more information about Heritage Auctions, and to join and gain access to a complete record of prices realized, along with full-color, enlargeable photos of each lot, please visit HA.com.