Heritage Auctions has been informed that the 1984 NBA All-Star Game MVP Trophy awarded to Isiah Thomas was stolen from his high school’s trophy case.  That trophy was to be included in the Dallas-based auction house’s Summer Platinum Night Sports Collectibles event that takes place Aug. 29-30. It was consigned to Heritage Auctions by a sports-memorabilia dealer in the Midwest.

On Monday night, Thomas took to Twitter to notify Heritage Auctions that the item had been stolen from the trophy case at St. Joseph High School in Westchester, Ill., where the Hall of Famer attended school and played under legendary coach Gene Pingatore. The item was immediately pulled from the auction, and an investigation was launched. 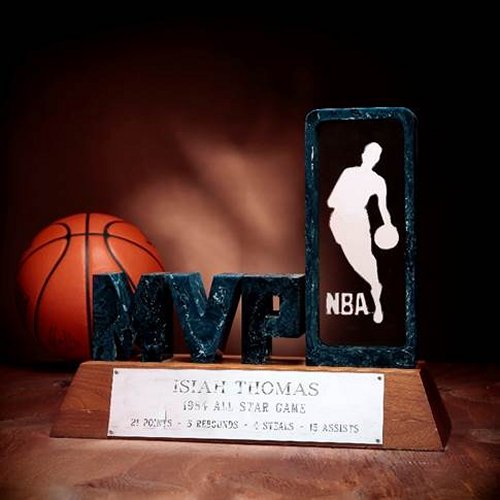 Based on extensive conversations Tuesday with Thomas, a Westchester Police Department detective and a St. Joseph official, the trophy will remain in Heritage Auctions’ Dallas offices. The auction house will continue working with law enforcement, Thomas, St. Joseph and the consignor to reach a swift resolution to this issue.

Thomas said he loaned the MVP trophy, along with several other items that were stolen from the trophy case in recent years, out of respect and affection for Coach Pingatore, who died on June 26, 2019, at the age of 82. Thomas said the items were loaned to St. Joseph with the understanding that they would one day be returned.

“For me and my family, the silver lining in all of this is that it showed up at your house [Heritage Auctions],” Thomas said Tuesday. “We never would have known, so we are grateful and I am thankful that the item was found and will be returned.”

“Heritage Auctions does not sell stolen property, so we take any claims of title seriously,” says Chris Ivy, Heritage’s Director of Sports Auctions. “Even though each consignor warrants clear title when material is consigned to auction, we do have issues of title or potential stolen property come up a handful of times per year. In those instances, we investigate to validate any claims, and if the title is in question, then the lot is removed from auction until the dispute can be settled.”

Heritage Auctions sincerely appreciates Isiah Thomas bringing this to our attention, and looks forward to working with him to expeditiously resolve the matter.