Entering the game on December 9th 2018, the Patriots were leading the AFC East with a record of 9–3, while the Dolphins had a record of 6–6. A Patriots win would clinch them their 10th consecutive AFC East title. The Patriots quickly struck first with a touchdown, there would be a total of eight lead changes, but Patriots kicker Stephen Gostkowski would miss not only the extra point on the aforementioned first touchdown, but a field goal attempt later on. Leading 30–28 after an unsuccessful attempt to score a touchdown in the waning seconds, he would score another field goal to put them up 33–28 with 16 seconds left to play. Down 33–28 with 7 seconds left in the fourth quarter, the Dolphins completed a 17-yard pass and two lateral passes resulting in a 69-yard touchdown by running back Kenyan Drake. It is the first walk-off game-winning touchdown in NFL history to involve multiple lateral passes, and the first multi-lateral touchdown since the River City Relay in December 2003. After the game, the play was known by several names, most commonly the “Miami Miracle” and the “Miracle in Miami”. 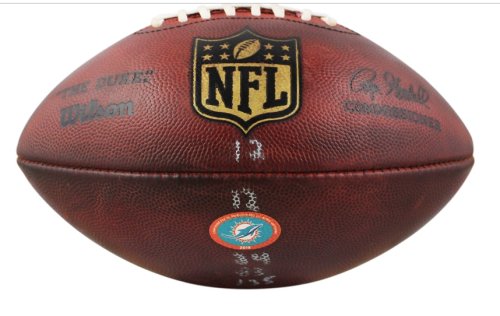 After Drake raced through the end zone, he tossed the football in his hands high into the air and into the stands. The ball was initially caught by a New England Patriots fan whom, in not wanting to keep a piece of memorabilia that would serve as a reminder of his team losing such a close game — and after conferring with his family who was sitting near him in the stands — sold it to our cosigner who was also sitting near the Patriots fan in the stands.

The football has the official NFL Logo and Roger Goodell insignia. The Wilson ‘Duke” ball has the Miami Dolphins logo on it as well as silver handwritten numbers commonly found on game used footballs. The football comes accompanied by an LOA from his attorney attesting to his statement of obtainment and can be confirmed by numerous witnesses who accompanied him at the game. Don’t miss this once in a lifetime opportunity to own the actual ball used during the final play on Dec 9, 2018 now famously known as the Miracle in Miami or Miami Miracle!