Why consign with Steiner?

New York – The Lou Gehrig Signed New York Yankees Uniform Players Contract from 1925, which fetched a high bid of $197,287.48, was the top seller in Steiner Auctions’ “Fall Classic” which concluded on Saturday (November 18). The Aaron Judge Game Used No. 99 Home Uniform Jersey from September 30, 2017, when he broke Babe Ruth’s 96-year record for most Home Runs at Yankee Stadium was second with a final bid of $90.676.95.

More than $1.25 million was bid in the auction.

Championship Rings did extraordinarily well, led by the 2013 Boston Red Sox Ring which sold for more than Double of what it sold for at a major competitors auction house just two years ago. A few other Rings that outperformed the competition were:

CONSIGN YOUR MEMORABILIA TO STEINER AUCTIONS
The consignment deadline is NOW . If interested in consigning memorabilia to the next Steiner auction may call 914-307-1058 or email auction@steinersports.com. 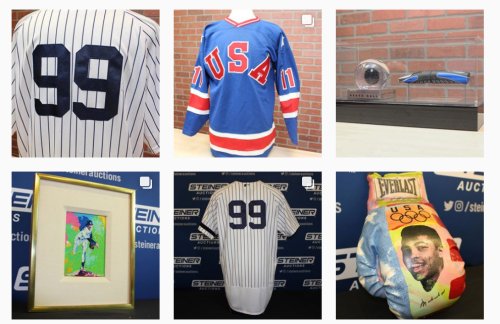