For the past two seasons, the New York Yankees have not sold their Jackie Robinson Day Game Worn Jersey’s, however, now they are available in a very special week long auction! Both home versions from 2016 and road versions from 2015 are all available in the Steiner Jackie Robinson Jersey Auction. There are a total of 66 Jersey’s available from both years, and the highlight includes Alex Rodriguez’s career home run 656 Game Worn Jersey! Proceeds from this auction will be donated by the New York Yankees to the Jackie Robinson Foundation!  Bid, view and register for the auctions at auction.steinersports.com. 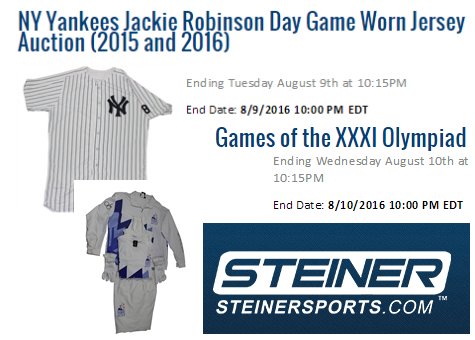 The Games of the XXXI Olympiad auction features a variety of Olympic memorabilia. From Olympic basketball, to hockey, to swimming, track and more, if it’s in the Olympics, it can be found in this auction. Running until Wednesday, August 10th at 10:15 PM, the Olympic auction features an Olympic used torch, an Opening Ceremony used USA uniform, and much more.