is excited to present our Derek Jeter Farewell Auction .  Bidding is in progress and concludes on October 19, 2014!   With an amazing selection of baseballs, autographs, game used and graded cards this auction truly has something for every type of collector.  Over 900 items up for bid!

It’s the Captains final season and for the entire year teams around the league have been paying tribute to Derek. He is an icon in the sport and the face of a franchise. Now it is our turn to pay respect with our Derek Jeter Farewell Auction. This auction features some amazing collectibles featuring Jeter and many of his Yankee teammates. What better way is there to commemorate the Captain than to add that awesome new collectible to your man cave. Also included in this auction are game used items from his final season, one of a kind inscription baseballs and special game used jerseys worn on the 75th Anniversary of Lou Gehrigs famous speech. These jerseys have a commemorate patch and the proceeds will be donated to the ALS Foundation. Don’t miss out on this incredible auction.

Bidding will end on October 19, 2014 at 11:15 PM EST. The auction is currently in progress at  Steiner Sports, so make sure to check it out, bid and register. It is sure to be spirited. 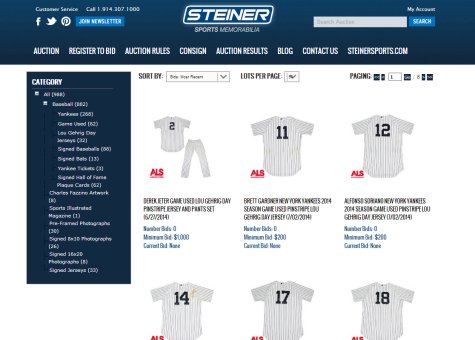