New York Yankees legend Don Larsen is willing to give up a piece of his history to help ensure his grandchildren’s futures. Larsen, who is the only pitcher in Major League Baseball history to toss a perfect game in the World Series, is auctioning off the jersey and pants he wore on that momentous October day in 1956. SteinerSports.com will govern Larsen’s auction. Bidding in progress on the 56th anniversary of the historic event, and run until Dec. 5th  on www.steinersports.com.

The Indiana University Hoosiers are one of the most storied programs in NCAA Basketball history. NBA Legends Larry Bird and Isiah Thomas launched their respective careers there, all under the coaching and guidance of one of the greatest of all time: Legendary Indiana University coach Bob Knight. He ranks second on the all-time wins list behind only Coach K of Duke, his perfect 1976 season was the most recent in NCAA history to date and his three national championships & four Coach of the Year awards speak to his amazing coaching abilities.   The Bob Knight collection is currently being offered in Steiner Sports special December 5th auction. 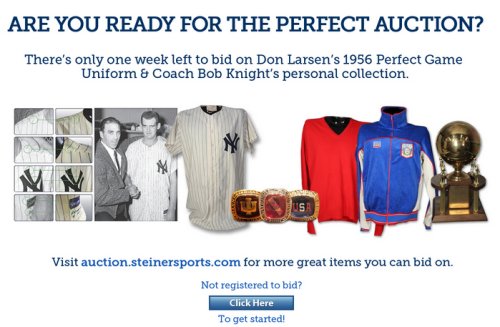