Acclaimed DJ, producer, entrepreneur and philanthropist Steve Aoki has partnered with Goldin to headline a new Pokémon trading card box break and auction to benefit charity. One hundred percent of proceeds of the auction will benefit autism, brain and pediatric-focused charitable causes.

The Pokémon Saves the World auction features 35 lots, each made up of three sealed packs of the rarest, most desirable Pokémon cards on earth. Collectively, the cards in the auction may be worth more than $1 million. Winners of each lot will receive one pack of cards each from the 1999 Unlimited edition, 1999 Shadowless edition and 1999 First edition. Winning bidders will also receive two VIP tickets to a legendary Las Vegas party at Airstream Park hosted by Aoki that will include celebrity meet and greets, Pokémon-theme entertainment, food and an open bar. Additionally, winners will automatically be entered into a lottery that will allow them to open their packs on stage at the party with Aoki.

The auction, which is being hosted by Goldin, the leading marketplace for trading cards, collectibles and memorabilia, along with legendary Pokémon card collector, Gary “King Pokémon” Haase and the stars of the hit YouTube channel Dumb Money is open for bidding until September 18. 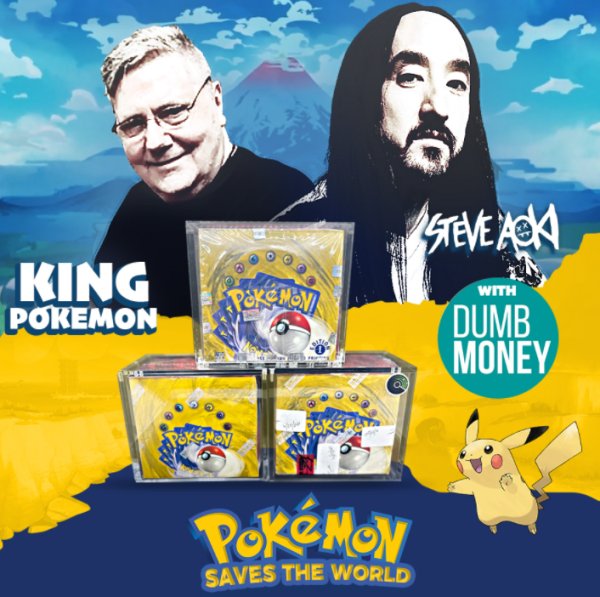 “A few things I really love are supporting good causes, throwing amazing parties and collecting Pokémon,” said Aoki. “Give me the chance to do all three at one time and you know I’m going all out!”

“One of the overarching themes of the Pokémon is friendship and helping each other back up after you get knocked down,” said Goldin Executive Chairman Ken Goldin. “Leveraging the power of Pokémon to raise money for these incredible causes proves that these aren’t just animated creatures and paper cards. Pokémon are real-life heroes and their existence may help save lives.”

The sealed packs included in the auction may contain rare cards worth six figures or more, including one of the most coveted Pokémon cards in the world, the 1999 1st Edition #4 Charizard Holographic card. In December of last year, a PSA GEM MT 10 example of that card sold for nearly $400,000 through Goldin.

Goldin has built a reputation as the trusted leader in trading cards, memorabilia and collectibles. The lots are part of the company’s first auction to solely focus on collectibles beyond sports and features 250 rare and valuable video games, comic books and trading card game items. The company has consistently broken auction records this year and has already done over $250 million in sales in 2021.

About Goldin:
Goldin is the leading marketplace for trading cards, collectibles and memorabilia. Founder Ken Goldin has sold more than $1 billion in memorabilia from many of the biggest names in sports, history, and pop culture. The company routinely sets records for the most expensive trading cards and other memorabilia ever sold. Lifelong collectors and new hobbyists alike trust Goldin because the company professionally authenticates everything it sells. Goldin is the official auction partner of the Naismith Memorial Basketball Hall of Fame, The Major League Baseball Players Alumni Association, The Jackie Robinson Foundation and the Babe Ruth Birthplace and Museum. Learn more at GoldinAuctions.com, and on Twitter and Instagram.