Beginning in 1908, when “Take Me Out To The Ballgame” became one of the year’s most popular songs, the Cracker Jack brand has been synonymous with baseball.  Today, the company’s baseball cards are likely to provide a New Jersey family with a six-figure windfall.  Love of the Game Auctions, a Hackettstown, NJ-based sports memorabilia auction company, will be auctioning a group of more than 170 newly-discovered 1914 and 1915 Cracker Jack cards, including ultra-valuable cards of “Shoeless” Joe Jackson, Ty Cobb, Christy Mathewson, and Walter Johnson.  The cards were discovered by a family who inherited them from a favorite uncle in 2002, in a box of assorted personal belongings.

“A find like this is a rare occurrence,” explained Auction Director Al Crisafulli.  “In 1914 and 1915, Cracker Jack included baseball cards as the ‘prize’ inside each box.  They were tremendously popular when they were issued, but they’re very scarce today, especially the 1914 cards.  Some collectors speculate that fewer than a dozen complete 1914 sets exist in the entire hobby.  The Christy Mathewson alone is a $20,000 card.” 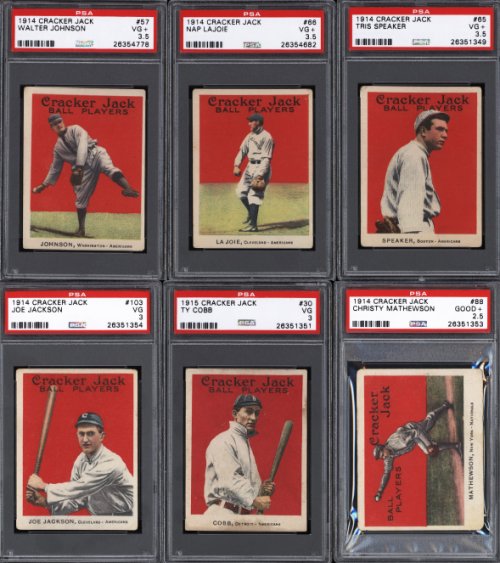 The cards were initially collected by a South Dakota boy named Oliver, who at 9 or 10 years old, bought as many boxes of Cracker Jack as he could afford, tucking the cards away into his growing collection.  Oliver, like many of us, eventually outgrew his baseball cards, but his mother didn’t throw them away – she packed them away in a box of his personal memorabilia, which included old report cards, Playbills, and letters.  Along with other heirlooms, the box was passed down through Oliver’s family over the years, eventually landing in the sleepy town of Stockton, New Jersey with his descendants in 2002 – where it remained unopened until this past summer.

The family reached out to Love of the Game Auctions due to the company’s reputation for handling significant sports memorabilia finds.  “The family had done their homework,” explained Crisafulli.  “There isn’t much historical precedent with collections like this when it comes to establishing value.  They took the time to understand what they had, how to properly assess their condition, and the best way to sell them.  They took great care to make the right decision when it came to selling the cards.  I’m thrilled that they chose Love of the Game to auction the collection.”

The cards, all of which have been professionally authenticated and graded by industry leader Professional Sports Authenticator (PSA), will be sold as part of Love of the Game’s Fall Auction.

“The cards are unbelievably clean,” stated Crisafulli.  “They’ve got some normal wear, because young Oliver clearly loved them and played with them as a boy – but once they were packed away, they didn’t see the light of day for the better part of a century.  Almost all the important cards are included – it’s the largest ‘original owner’ collection of Cracker Jacks we’ve ever seen.”

According to Crisafulli, early word of the consignment has been met with strong enthusiasm. “Beyond its significant value, this is the kind of collection that makes baseball fans of all ages feel like kids again,” he said. “Everyone knows Cracker Jack – it’s one of the oldest and most respected American brands.  Everyone knows players like Ty Cobb and Walter Johnson – they bring us back to a more innocent time.  It’s a truly fantastic and rare find.”

LOTG’s call auction will open in early November and run through November 19. Crisafulli added that the Cracker Jack collection will share the spotlight with an impressive lineup of featured items including Christy Mathewson’s World War I garment bag, a beautiful 1909-11 T206 near set, a 1952 Topps Mickey Mantle graded SGC VG 40, a beautiful selection of 19th Century baseball cards, and much, much more. For more information, visit www.loveofthegameauctions.com.