The spectacular 1852 medal honoring the revered Kentucky native and statesman Henry Clay makes its first public appearance in Lincoln and his Times, a special, joint auction event Sept. 17 at Heritage Auctions. It is one of  many crown gems among 869-lots celebrating the 20th anniversary of The Rai Splitter,  a respected publication for enthusiasts of Abraham Lincoln and related memorabilia.

“The Clay medal has created great excitement in the collecting world,” said Tom Slater, Director of Americana Auctions at Heritage, “both as a highly important historical artifact and as one of the most important United States Mint medals ever to appear at auction.”

The medal is 3-1/2-inches in diameter and approximately a half-inch thick and will open with a $75,000 bid – “a conservative minimum and level which invite active bidding from collectors and institutions,” Slater said. 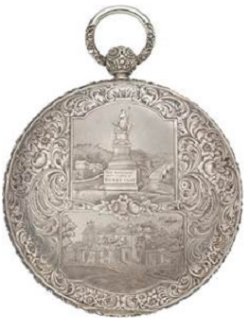 The history behind the medal is as captivating as the design and custom case itself: Three-time presidential candidate, former Secretary of State, Speaker of the House, and titan of the U.S. Senate Henry Clay was by 1852 confined to his rooms in the National Hotel in Washington, slowly dying of consumption. A group of prominent New York members of Clay’s Whig Party resolved to make a very special presentation to the statesman to honor his nearly half century of public service.

The dies for a massive, 3-1/2-inch medal were engraved by the leading American engraver of the day, Charles Cushing Wright, and it was struck by the U.S. Mint. Wright also designed and engraved a one-of-a-kind silver case in the style of a pocket watch, with Clay’s Ashland home and a monument on one side and the U.S. Capitol on the other, to protect the medal’s gleaming mirror surface. Wright was charged with producing “the most perfect specimen yet produced of American (medallic) art,” a truly “immortal work.” All agreed that he had met the challenge.

On the front is a superbly sculpted high relief profile of Clay, while the reverse lists his signal achievements. In February the sponsoring committee traveled to the capital, where dignitaries including President Millard Fillmore crowded into Clay’s rooms for the presentation. With what was obviously great effort Clay stood to acknowledge the gift, which he declared to be a great treasure to be passed down through his family. Clay’s descendants have provided careful stewardship of the medal for generations. But earlier this year the decision was made that they could no longer bear this responsibility, and that it was time for the medal to pass into the hands of someone who would appreciate and care for it. Accordingly Clay’s beloved medal has been entrusted to Heritage for auction.

“The placement of this medal in an auction entitled “Lincoln and His Times” might at first seem curious,” Slater said, “but Lincoln was a great admirer of Clay. Indeed, when Lincoln was elected to the Presidency in 1860 the committee which had sponsored the Clay medal presented him with one of the copies struck in bronze (Clay received the only specimen in gold).”

The Committee recognized Lincoln as “a true disciple of our illustrious friend, and (we) take great pleasure in … transmitting the medal to you, and begging your kind acceptance of it.” Lincoln graciously acknowledged the gift, expressing his admiration for Clay and declaring that he felt “extreme gratification … in possessing so beautiful a memento of him whom, during my whole political life, I have loved and revered as a teacher and leader.”

Clay’s 30-ounce gold medal will be offered Sept. 17 in Lincoln and His Times. Additional highlights include a highly important letter from Lincoln to his first fiancée Mary Owens, as well as locks of hair from John Wilkes Booth, Mary Todd Lincoln and Lincoln himself.