With the Packers, Niners, Titans and Chiefs still in the hunt for the coveted Vince Lombardi Trophy, the interest in playoff football and football memorabilia is at an all-time high. And, while admittedly players such as Patrick Mahomes, Jimmy Garoppolo and Aaron Rodgers are among some of the most popular players in today’s NFL, Heritage Auctions will instead highlight gridiron legends of yesteryear and a few modern players who are not alive in the playoffs but destined for Canton in their upcoming February 22-23 Platinum Night Auction.

While presenting one of the greatest selections of football gamers ever to hit the auction block, we would like to take this opportunity to highlight several from that impressive grouping:

2013 Tom Brady Game Worn New England Patriots Jersey Photo Matched to Three Games! – Est. $60,000+
The experts at Resolution Photomatching have provided high-resolution proof of action in three separate contests–the season opener at Buffalo on September 8th, a September 29th visit to Atlanta, and the following week’s October 6th showdown at Cincinnati. Brady would pass for two touchdowns in each of the first two victories before being blanked in that category and sacked four times in a wet weather loss to the Bengals.

We believe that the jersey was not washed after the October 6th game, as we can still see a brown ball mark at upper right chest, likewise apparent in photography from that contest. The photo matches supplied by Resolution make note of this for that game, but otherwise tends to concentrate on mesh hole patterns and other issues not related to impact marks.

2009 Peyton Manning Game Worn & Signed Indianapolis Colts Jersey–Photo Matched with NFL & Colts Documentation! -Est. $10,000+
He’s on the short list of the greatest quarterbacks in NFL history, and the contest in which this blue mesh beauty saw action found Manning at his absolute best. The Hall of Fame passer led his Colts to touchdowns on four of their first five drives during this October 4, 2009 meeting with the Seattle Seahawks at Lucas Oil Stadium, racking up multiple milestones in the thirty-four to seventeen victory:

2002-03 Rod Woodson Super Bowl XXXVII Game Worn Oakland Raiders Jersey with Two Repairs Photo Matched. – Est. $6,000+
An esteemed member of the NFL’s 75th All-Time Team, safety/cornerback Rod Woodson turned in an astounding 71 interceptions during his Hall of Fame career. While being named to 11 Pro Bowls, the 1993 NFL Defensive Player of the Year wore this white “Reebok size 44” jersey during the 2002 season and Super Bowl XXXVII. Excellent wash wear is exhibited throughout and this beauty has been pinpointed to the Super Bowl by the experts at Resolution Photomatching.

1994 Reggie White Game Worn Pro Bowl Jersey & Pants Photo Matched – His First Pro Bowl as a Packer! -Est. $5,000+
Reggie White created waves in the NFL world when he landed in tiny Green Bay following his free agent courting. The Minister of Defense paid immediate dividends and helped push the Packers into the playoffs for the first time since 1982 during the ’93 season. White concluded his whirlwind season by appearing in the Pro Bowl, and this “Wilson size 52” jersey was worn by White during his first Pro Bowl as a member of the Green and Gold!

1960-63 Jim Taylor Game Worn & Signed Green Bay Packers Jersey, MEARS A9 – Est. $30,000+
One of only a few authentic Taylor gamers in the hobby, this “Red Fox” tagged stunner was most likely worn in the 1962 NFL Championship when the Packers defeated the New York Giants at Yankee Stadium

1978 Jack Lambert Game Worn Pittsburgh Steelers Jersey – Est. $40,000
He was terrifying enough even without that Jack o’ Lantern grin, six feet and four inches of bone-crushing power wrapped in the black and gold of the sport’s most dominant franchise. During Lambert’s eleven seasons in Pittsburgh, he claimed Vince Lombardi’s namesake trophy four times, his third coming the season he suited up in the offered road white heavy durene gamer. 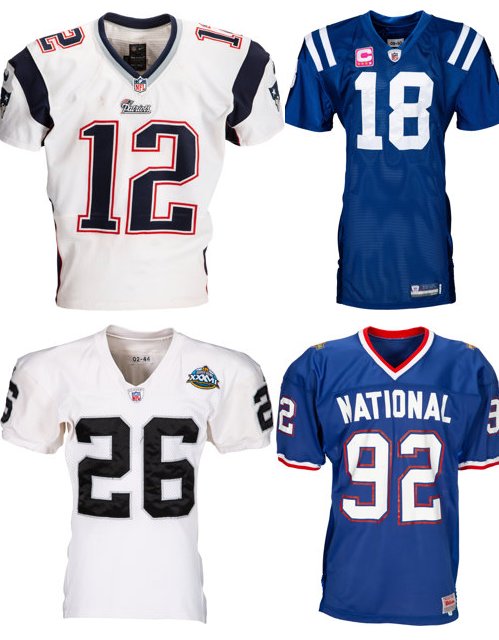