It was a record-setting night at The Goldin Auctions Great American Trading Card Auction as more than 20 new records were set with just 50 lots of trading cards recording $6.7 million in sales. The headline item did not disappoint, as the famed 1909-11 T206 White Border Honus Wagner PSA EX 5 (MC) the “Jumbo Wagner” sold for a record $3.12 million, making it the first $3 million sports trading card.

The record price of the T206 Wagner, which surpassed the previous record of $2.8 million for the “Gretzky Wagner,” did not surprise industry experts nearly as much as the $312,000 paid for a 2003-04 Upper Deck LeBron James 1/1 “Ultimate Logos” Autographed Logoman Rookie PSA MINT 9. The card established a mark as both the most expensive autographed trading card ever sold and the most ever paid for a card made after 1980. 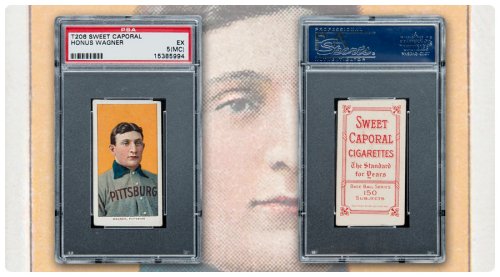 “The demand for rare, high-grade vintage cards has exploded so we were confident that there would be some eye-popping results and new record prices established,” said Ken Goldin, Founder of Goldin Auctions. “Every time one of these rare collectibles is offered for auction, serious collectors realize that it may be the last time for a long time. The booming market for high-grade rare trading cards, coupled with the limited supply, created the perfect storm for these remarkable prices.”

Here’s a look at some of the highlights and some of the record prices established. For all of the prices realized, visit www.GoldinAuctions.com.

The next Goldin Auctions event, the annual October Legends Auction will begin on October 10. To register, or receive a free catalog or to consign an item for the Goldin Auctions Holiday Auction or the next Great American Trading Card Auction, scheduled for early 2017, visit www.GoldinAuctions.com.