It’s been one of the most anticipated auctions in recent memory and finally “The Event” is here! Led by three great hobby icons: a T206 Honus Wagner PSA 2, T206 Cobb with Cobb back PSA 4.5 the finest example from “The Lucky 7” find, and a recently discovered 1916 M101-5 Holmes to Homes Babe Ruth rookie card, the only known example, the Mile High Card Company October Auction offers several more items that would serve as the premier lot in many other auctions. The auction opens for bidding on Monday, September 23rd and closes on Thursday, October 10th.

Following close behind that legendary trio is a 1909-11 T206 Sweet Caporal Eddie Plank PSA 4 VG/EX, 1933 Goudey #106 Napoleon Lajoie PSA 4.5, the only known 1933 Sport Kings Gum #2 Babe Ruth Autographed PSA/DNA MINT 9, 1950-51 Toleteros Joshua Gibson PSA 4 VG-EX, and a 1952 Topps #311 Mickey Mantle PSA 4 VG-EX. “This auction is like fielding a baseball team where everyone in the lineup is a first-ballot Hall of Famer.” said MHCC President and CEO Brian Drent, “We’re incredibly excited and blessed to see “The Event” take our hobby to new heights, especially the T206 Wagner and the newly discovered, one-of-a-kind items.” 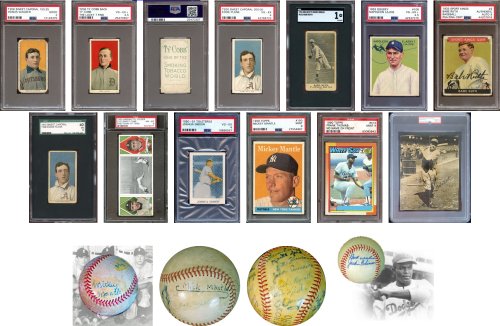 We’d like to thank everyone who came out to see us at the National and once again, congratulations to Jeff Williams, winner of the single-signed Babe Ruth baseball. As memorable as “The Event” promises to be, Mile High Card Company is already hard at work to make the next auction even better.

MHCC is currently accepting consignments for the Fall Elite Auction, so if you desire the maximum possible return for your prized sports cards and memorabilia, please call our office at (303) 840-2784 to speak with one of MHCC’s experts, or visit our website at www.milehighcardco.com.