The Great American Trading Card Auction an online auction featuring 50 lots of the hobby’s most sought-after high-value trading cards is on target to set several records, including a new standard for the most expensive trading card ever sold, as the 50 lots are on up for auction through October 1 at GoldinAuctions.com. Headlined by the famed 1909-11 T206 White Border Honus Wagner PSA EX 5 (MC) the “Jumbo Wagner” the auction also includes rare high-grade rookie cards of Hank Aaron, Roberto Clemente, Mickey Mantle, Michael Jordan, LeBron James, Joe DiMaggio, Nolan Ryan, Duke Snider, Roy Campanella and others.

Bidding upon the T206 Honus Wagner, known as the “Jumbo Wagner”, has already reached $2.28 million (includes buyer’s premium). It last sold in 2013 for $2.1 million — the highest price ever paid for a trading card at auction. Experts believe the timing is right for yet another record, not only as the first $3 million trading card, but potentially as the most valuable item of sports memorabilia ever sold. The current standard bearer is Babe Ruth’s 1920 Game Worn Jersey, which sold in 2012 for $4.4 million. 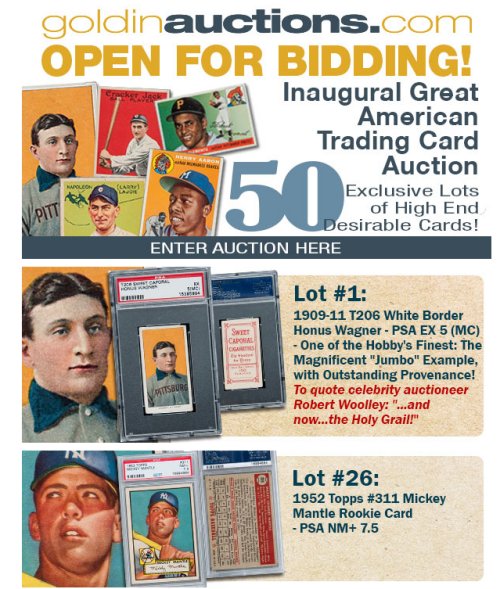 “The demand for rare, high-grade vintage cards has exploded with new record price being established every week,” said Ken Goldin, Founder of Goldin Auctions. “Every time one of these rare collectibles, such as the T206 “Jumbo Wagner,” is offered for auction, serious collectors realize that it may be the last time for a long time. The booming market for high-grade trading cards coupled with the limited supply, creates the perfect storm for the Jumbo Wagner and several of these other cards to establish new records.”

The Great American Trading Card Auction includes six cards awarded a PSA 10 GEM MT rating, five cards designated as 1 of 1’s and four cards recognized as 1 of 2. Remarkably, more than a dozen of the cards estimated to sell for more than $100,000 including nine surpassing $200,000.

Here are a few of the other current bids (not including buyer’s premium) as of Sept 28 at 9 A.M. ET. For more detailed descriptions, visit www.GoldinAuctions.com.

To preserve the integrity of the auction and protect all bidders and the consignor, bidding on Lot #1 – the Jumbo Wagner – requires pre-approval. All interested bidders must contact Goldin Auctions in advance for pre-approval or they will not be authorized to bid. For more information about The Great American Trading Card Auction, contact Goldin Auctions at info@goldinauctions.com or call 856-767-8550.