Mile High Card Company’s March Auction, the most comprehensive offering in the company’s 22-year history, closed on Thursday March 21st with incredible results that included a slew of record-setting prices. Leading the auction was a quartet of museum-quality highlights that perfectly epitomized the diversity of the event; an 1888 N173 Old Judge King Kelly “Street Clothes” variation cabinet card (one of only four known to exist) that sold for $63,056, a collection of game-used bats that included each member of the legendary 500 home run club that brought in a combined $299,644, a 1933 V353 World Wide Gum (Canadian Goudey) Uncut Sheet Featuring (3) Babe Ruth Cards and Lou Gehrig that closed at $49,403 and a spectacular 1909-11 T206 Near-Complete Set (477/520) All PSA Graded #8 on PSA Set Registry that fetched $127,920. “It was a long night of heavy bidding but with such amazing material being presented, we were ready for the challenge” said MHCC President and CEO Brian Drent, “We were pleased to see how many record prices were set tonight.” 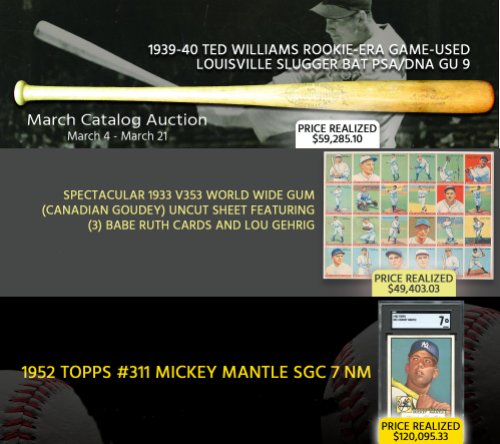 Other incredibly rare items that were of particular interest to advanced bidders were an Absolutely Stunning High-Grade Babe Ruth Single-Signed Rare “Two-Star” 1943 OAL (Harridge) Ball PSA/DNA and JSA that was sold for $34,867, Amazing Roberto Clemente Signed Real Photo Postcard Dated July 1955 PSA/DNA that fetched $5,461 and a Fantastic 1963 The Beatles Signed Parlophone Records Promotional Postcard with All Four Members went to the high bidder at $5,920, with a tremendous selection of vintage and one of a kind original type I photographs that included a 1916 Chicago American Giants PSA/DNA Panoramic Photo Featuring Rube Foster, “Pop” Lloyd and Pete Hill that brought in $10,114, 1921-22 Santa Clara Leopardos PSA/DNA Type I Original Photograph Featuring Oscar Charleston and Alejandro Oms that went for $4,934, 1921 Babe Ruth PSA/DNA Type I Original Photograph by Paul Thompson that landed at $16,599, 1918 Fort Porter Baseball Team Panoramic Photograph Featuring Shoeless Joe Jackson and Lefty Williams that was heavily bid on and sold for $5,644 and a Fantastic 1946 Pre Rookie Era Jackie Robinson PSA/DNA Type I Original News Service Photograph bringing in $2,971.

Once again, we’d like to thank our fantastic consignors and the best bidders in the business for allowing us to bring you this truly memorable event. As magnificent as this auction was, the MHCC staff is working diligently for an even bigger and better June auction, and there’s still time to get your consignments in, so if you desire the maximum possible return for your prized sports cards and/or memorabilia, please call our office at (303) 840-2784 to speak with one of MHCC’s team of experts or visit www.milehighcardco.com.