SCP Auctions’ 2022 Winter Premier Auction has now kicked off with a pair of 1984 Michael Jordan Olympic Trials game-worn and team-signed Converse sneakers, the triple crown of Braves 2021 World Series home run balls, a PSA Authentic T206 Wagner, and much, much more. Bidding on the over 580 lots began Wednesday, January 19th and will conclude Saturday, February 5, 2022 at www.SCPauctions.com.

After the final tune-up game of the 1984 Olympic Trials in San Diego, California on July 25, 1984, Jordan gifted the Converse shoes he wore throughout the trials to the teenage son of the USA team physician, who was with the team on parts of their journey. Those are the kicks we are offering in this auction. The shoes are dual signed by Jordan in red ink, as well as fellow future Hall of Famer and 1992 “Dream Team” teammate Chris Mullin, plus ’84 USA players Vern Fleming, Alvin Robertson and Wayman Tisdale (D. 2009). 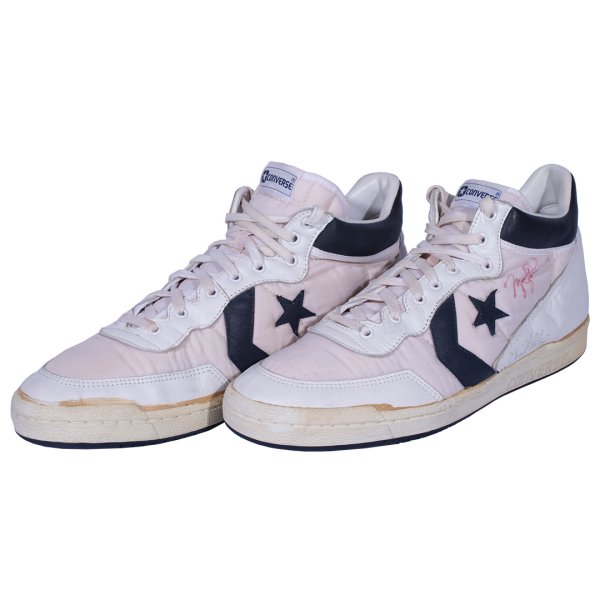 The auction also features a triple crown of Atlanta Braves lots, all home run balls smacked in the clinching Game 6 of the 2021 World Series. Perhaps the most talked-about homer of the three was World Series MVP Jorge Soler’s three-run, 446-foot moonshot that went straight out of Minute Maid Park in Houston. That bomb was followed by a two-run, 411-foot blast from Braves shortstop Dansby Swanson in the fifth inning. The Braves were still shutting out the ‘Stros 6-0 in the top of the seventh inning when Freddie Freeman put the cherry on top of the victory with a solo shot to put the Braves up 7-0, a lead they would never relinquish en route to the team’s first title since 1995. 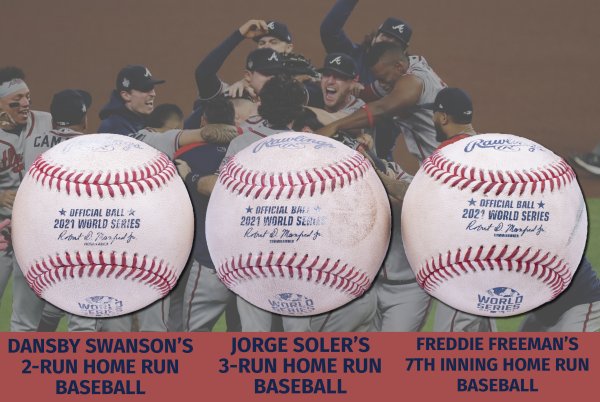 One of the other iconic and historic lots in the auction is the Holy Grail of the hobby, a 1909-11 T206 Sweet Caporal Honus Wagner graded PSA Authentic. The card carries the PSA certification number 00000002. The example is slabbed in its original PSA flip, which states it is “PSA Genuine.” It recently resurfaced after dwelling in the consignor’s collection since the 1990s. Though slightly more than 50% of the card remains, in our opinion it is still more valuable than 90% of sports cards in existence. 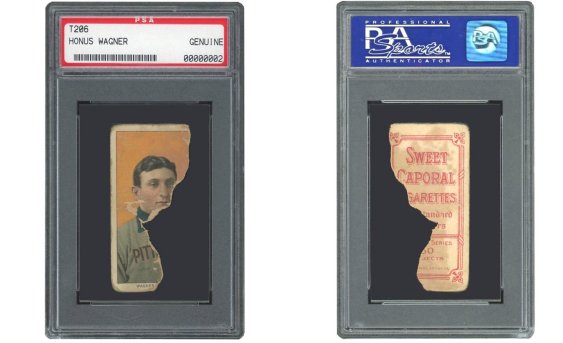 Some of the other premium cards featured in the sale are also of great historical significance. A signed 1984-85 Star Co. Michael Jordan is his true rookie card and is being offered in a BGS NM-MT+ 8.5 grade with a 10 autograph. There is only one example graded higher than the beautifully signed 1952 Bowman Mantle graded PSA VG-EX 4 with a Mint 9 auto offered in this auction. No examples are graded higher than the 1933 Goudey #92 Lou Gehrig graded SGC Mint 9 in the sale.

This auction is also chock full of original photographs, the vast majority of which have been encapsulated Type 1 by PSA/DNA. One of these lots is a June 13, 1948, photo of “The Babe Bows Out,” believed to be the actual print used for the Herald Tribune the night the iconic image was shot. Among the many other significant Type 1 lots: a 1920 Shoeless Joe Jackson “Baseball Crook” photo, a signed and inscribed Lou Gehrig photo (George Burke) from the Earle Combs Family Collection, a shot from Sandy Koufax’s 1954 rookie signing with the Dodgers, a February 1988 image of Michael Jordan winning his second-consecutive Slam Dunk Contest, and a Martin Luther King Jr. photo from his protest speech in Selma, Alabama.

There are some high-end modern cards available in the sale as well. A 2017 Bowman Mega Box Chrome Prospects Shohei Ohtani rookie is the only example in the PSA population report with two Gem Mint 10 grades for both the card and the auto. A variety of Patrick Mahomes cards are being presented, including a 2017 National Treasures Rookie Colossal Material Signatures graded BGS Mint 9 with a 10 auto. For those looking to get their hands on a rookie example of an NFL player on the rise, look no further than the two Mac Jones rookie patch autos offered — both numbered out of 5.

On the memorabilia side of the sale, SCP is presenting an 18-karat gold presidential Rolex engraved wristwatch owned by the great golfer Arnold Palmer. The watch is engraved on the case back with Palmer’s monogram “ADP,” for Arnold Daniel Palmer. This delightful timepiece was later included by Palmer as part of a black-tie charity dinner and auction held at the Waldorf-Astoria Hotel in Manhattan, NY on June 13, 1995, to celebrate the 100th anniversary of the founding of the U.S.G.A. (United States Golf Association).

Other significant game-used memorabilia include the cap and sunglasses worn by Fernando Tatis Jr. in his 2019 MLB debut, a circa 1970 Pele Brazil match-worn shirt, and Joc Pederson’s 2021 bat he “stole” from Anthony Rizzo and used to hit three postseason home runs.