If there was any doubt that T206s still rule the hobby, that notion was put to rest with a slew of incredible prices realized in the Mile High Card Company July Auction. “With the outstanding selection of high-grade and rare backed tobacco cards that we were fortunate to offer, we expected some spirited bidding but the result was nothing short of amazing” said MHCC President and CEO Brian Drent. 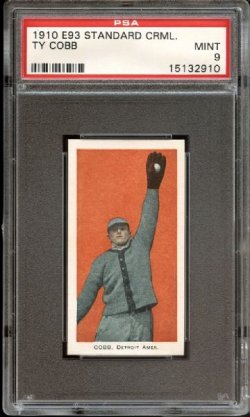 The auction was headlined by the only existing E93 Standard Caramel PSA 9 MINT example of Ty Cobb which sold for $82,317, Christy Mathewson which sold for $53,057, and Honus Wagner which sold for $50,530, as well as an incredibly scarce T210 Joe Jackson AUTHENTIC, one of less than ten known to exist, that was claimed for $71,106.

The entire list of prices realized is available on our website at www.milehighcardco.com. We are actively seeking consignments of quality hobby material for our October auction as we hope to see you at the National Sports Collectors Convention in Chicago July 28th-August 2nd as well as the The East Coast National Show in White Plains August 13th-August 16th.

If you desire the maximum possible return for your prized sports cards and/or memorabilia, please call our office at (303) 840-2784 to speak with one of our team of experts or visit us at the shows. We’re looking forward to an even more spectacular auction for all of our loyal bidders and consignors!