The National Sports Collectors Convention (National), the annual premier showcase event of the multi-billion dollar collectible industry, announced they are teaming with Military Missions In Action (MMIA), a 501(c)3, via Signatures for Soldiers (SFS), dedicated to assisting military veterans with disabilities, members of the Armed Forces, and their families.

“We are extremely excited the 42nd National Sports Collectors Convention is partnering with Military Missions In Action (MMIA) to benefit military veterans and their families,” said John Broggi, National Show Promoter. “In addition, Signatures For Soldiers fundraising campaign enables our exhibitors and show attendees to show their support and appreciation for the men and women who have served and sacrificed for our country.”

The National will support the Military Missions In Action campaign to raise funds, via their Signatures For Soldiers fundraising campaign, which assist disabled military veterans and disabled children of active-duty military personnel, by providing on-site complimentary exhibitor space and conducting an online auction, powered by Pristine Auction, with 100% of the auction bid benefiting Military Missions in Action. 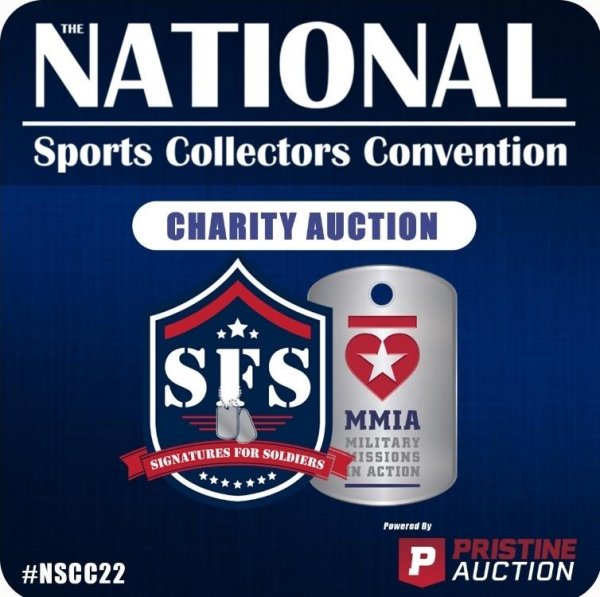 “We are incredibly grateful to the National Sports Collectors Convention for conducting an online auction, powered by Pristine Auction, with 100% of the auction bid total benefiting MMIA/Signatures For Soldiers,” says, Tim Virgilio, Military Missions In Action Advisory Board Member and Signatures For Soldiers founder.

Open to the public, the Atlantic City Convention Center will be transformed into a collector’s paradise utilizing 400,000 plus square feet, including 650 high profile exhibitors from around the country who are buying, selling and trading sought after sports/entertainment collectibles and memorabilia. The National’s Tristar Autograph Pavilion will feature 125 plus superstar athletes/entertainers signing and taking photo-ops with sports fans and collectors alike throughout the week.

“Pristine Auction is extremely honored and proud to be the official NSCC Auction platform benefiting our disabled veteran military men, woman and disabled children of active-duty military personnel,” said Jared Kavlie, President, Founder Pristine Auction. “We salute the commitment and great support non-profit Military Missions In Missions and Signatures For Soldiers provides those who serve and sacrifice for our Nation.”

About Pristine Auctions
Pristine Auction is a family-owned and operated online auction, specializing in autographed memorabilia, sports cards, coins, art, and collectibles. Since our founding in 2010, we have grown from a spare bedroom to 2 facilities in Phoenix, Arizona, totaling over 60,000 square feet. We have an incredible staff of over 150 team members serving our customers. By working with the leading authentication companies, we ensure all items are 100% authentic. In addition, we have leading third-party authenticators that regularly travel to Pristine Auction to provide authentication services on site. Pristine Auction strives to operate its business in a way that is honoring to God, our families, and our customers. With a strong focus on speed, quality, and premier customer service, our mission is to be the leading online auction for every level of collector and fan. Pristine Auction offers several online auction formats with thousands of auctions ending each day. For more information email – Israel@pristineauction.com

About National Sports Collectors Convention
The National Sports Collectors Convention is the world’s largest gathering of collectors, dealers, and any other groups interested in buying, selling, and collecting trading cards, autographs, and other related sports and entertainment memorabilia. Started in 1980, The National has grown into an annual extravaganza that is the premier showcase event of the multi-billion dollar collectibles industry. It’s been said, “If you can’t find what you’re looking for at the National, it probably doesn’t exist.”

About Military Missions In Action
Military Missions In Action, often referred to as MMIA, is a registered 501(c)3 that supports disabled military veterans and disabled children of active-duty military personnel by providing home repairs, remodels, and renovations at no cost to the recipients or their families. MMIA also supports deployed active-duty military personnel and homeless veterans by providing care packages. Since being founded in January 2008, MMIA has provided over $11 million worth of services to those that have or are currently serving our Nation. For every dollar that is brought in, MMIA spent nearly 97 cents on direct services to disabled military veterans.