SCP Auctions is extremely excited to announce that it will offer the personal memorabilia collection of former major league pitching great Don Drysdale. The late Hall of Famer’s unbelievable lineup of baseball heirlooms and mementoes – dating as far back as 1954 during his senior year at Van Nuys (Calif.) High School – encompasses more than 200 lots and will hit the online auction block on Wednesday, April 6, at www.scpauctions.com.

Drysdale’s most prominent awards and game-worn uniforms are included: 1963 and ’65 World Series championship rings; 1956 National League championship ring; 1962 MLB Cy Young Award; a host of game-worn Dodger uniforms from his playing days in both Brooklyn (1956, rookie season) as well as Los Angeles (1965, ‘66 and ’69); and the actual game-used baseball from the final inning pitched of his then-MLB record streak of throwing 58-and-two-thirds innings of scoreless baseball in 1968.

“We feel honored to have been chosen by the Drysdale family to bring this extraordinary collection to auction,” said SCP Auctions President David Kohler. “Don was among the most accomplished and revered pitchers in Major League Baseball history and his impressive assemblage of awards and accolades speaks volumes as to his winning ways out on the mound.” 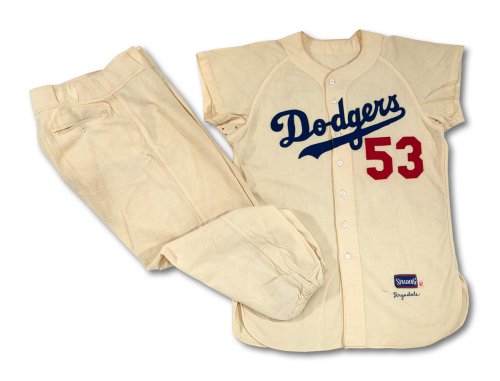 A standout baseball player from more than half a century ago, Drysdale was drafted by the then-Brooklyn Dodgers in 1954 right out of high school. Within two years, the 6’ 5” right-hander was brought up from the minors and eventually earned a spot in the Dodgers starting rotation at age 20 when he posted a team-high 17 victories in 1957. A nine-time MLB All-Star, Drysdale posted 209 career wins, struck out 2,486 batters and led the N.L. in K’s in three different seasons (1959-60, ’62). He also played a major role in helping the Dodgers reach the World Series five times and winning it all thrice. A torn rotator cuff forced “Big D’ to retire during the 1969 season and he was elected to the Baseball Hall of Fame in 1984. A long time radio broadcaster after his playing days ended, Drysdale died suddenly of a heart attack on July 3, 1993, during a road trip with the Dodgers to Montreal. He was 56 years old.

About SCP Auctions
SCP Auctions is one of the nation’s largest auctioneers and private sellers of important sports memorabilia and cards, and is considered a leader in its industry. Founded in 1979 by David Kohler, SCP Auction’s record speaks for itself, as the company has realized record auction and private sale prices for items including the c. 1920 Babe Ruth New York Yankees game worn road jersey ($4.415 million); T-206 Honus Wagner card ($2.8 million); the bat Babe Ruth used to hit the first home run in old Yankee Stadium ($1.265 million); the contract that sent Babe Ruth to the Yankees from the Red Sox ($996,000); Barry Bonds’ record-breaking No. 756 home run ball ($752,467); and Babe Ruth’s gold pocket watch presented to him by the New York Yankees during his last appearance at Yankee Stadium in 1948 ($650,108). The company’s consistency and industry knowledge have helped to maintain SCP Auctions’ stellar reputation as a dominant figure in the sports memorabilia world, and it is highly visible throughout the category due to its presence at major collectibles shows across the country and placement in all the major trade publications.

SCP Auctions principals David Kohler, Dan Imler, Clay Hill, and Brendan Wells have more than 100 years of combined industry experience and dealing in vintage sports cards and memorabilia isn’t just their jobs – it’s their passion. SCP Auctions has the expertise for every collector’s interest, whether your passion is in 19th century material, high grade PSA/SGC cards, game-used pieces or single cards and sets.

SCP Auctions is happy to offer suggestions and guidance on how to get the most out of any collector’s budget. SCP Auctions prides itself on customer service and speedy responses to any issue or inquiry, and calls many of the nation’s top collectors its clients and, more important, friends. SCP Auctions has aided collectors in their own collection sales, including both the Bill Nowlin and Bill Riddell historic bat collections, featuring game-used bats from Ty Cobb, Babe Ruth, Roberto Clemente, Ted Williams and Lou Gehrig; the Mitsuhiko Fujita collection spanning the 1928, ’31, and ’34 major league all-star tours to Japan; the Kirk Harris T206 tobacco card collection; and the esteemed collection of Dr. Douglas Triplett’s “regionals” and test-issue single cards. We know we wouldn’t be able to succeed without your active participation, and we value our relationships with collectors and consignors alike.

For more information on SCP Auctions, please visit our web site at scpauctions.com.