The best SGC-graded “near set” of the ultra-desirable E98 “Set of 30” baseball cards – issued in 1910 and known to hobbyists as part of the famous 2012 “Black Swamp Find” in Defiance, Ohio – is being offered at auction for the first time ever in the Goldin Auctions 2018 Holiday Auction. The sale of the near set (25/30), which holds the #1 ranking on the SGC Set Registry, runs from Nov. 19 through Dec. 8.  The auction catalog is open for preview at GoldinAuctions.com.
Among sophisticated enthusiasts of vintage baseball collectibles, E98 cards carry a mystique that’s simply unsurpassed. The player images, the cards’ origins, the issue’s limited distribution, and impossible rarity place these very special pieces at the pinnacle of candy-card specialists’ fascination. The offered gallery includes the 25-card near set graded by SGC, plus nine additional, variation cards. The fabulous, showcased roster is missing only Jennings, Mathewson, Lajoie, Tinker and Walsh for completion. 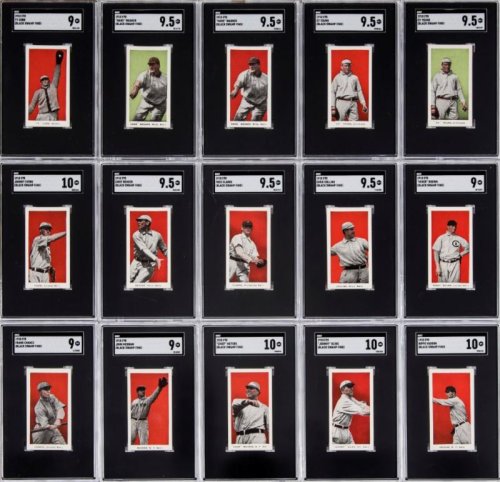 “It is truly an honor to bring this incredible collection to auction and make it available to our passionate and growing universe of vintage collectors,” said Ken Goldin, Founder of Goldin Auctions. “We look forward to seeing who will add this rare item to their collection.”
When whispers of an E98 “find” were first heard, collectors were amazed that the “find” could harbor this supreme near set of beautifully well-preserved jewels, fortuitously spared from recycling or the garbage bin. The cards were carefully tied together, with twine, by a print shop employee more than a century ago and have remained undisturbed since then.
One after another, the observer is stunned by the quality of these cards’ illustrations, and the boldness of their backs. Highlights of this assembly include: SGC GEM 10: 4 cards w/Evers, Kling, Meyers and Vaughan; SGC MINT+ 9.5: 7 cards w/Bender, Clarke, Collins, Wagner/Green, Wagner/Red, Young/Green and Young/Red; SGC MINT 9: 10 cards w/Bresnahan, Bridwell, Brown, Chance, Cobb, Coombs, Dooin, Ford, McGraw and Tenney.
About Goldin Auctions
Sports memorabilia impresario Ken Goldin has sold more than $700 million in memorabilia from many of the biggest names in sports, history and pop culture and was the pioneer of using the medium of television to sell sports memorabilia. Over the past few years, Goldin Auctions sold Babe Ruth’s 1918 contract for a record $1.02 million, an Honus Wagner T206 card for a public sale record $3.12 million, the Mike Piazza Post-9/11 home run jersey for $365,000, and the 1979-80 Wayne Gretzky PSA 10 rookie card for a record $465,000. Goldin Auctions strives to break new ground and offer collectors the best in collectible treasures up for auction in the marketplace. All game-worn or autographed items come with team, player, league or additional LOA from industry leading authenticators; and collectors can bid with confidence that their proxy/ceiling bids remain confidential. For more information, visit www.goldinauctions.com.
Tagsauction E98 set goldin auctions Graded Cards Jennings Lajoie Mathewson sgc SGC set registry Tinker