SCP Auctions will offer what it is billing as the first photo-matched ’92 Olympic jersey from one of the trio of titans from the era.  The blue jersey donned by Magic Johnson is expected to sell for $150,000 or more.  During the summer of 1992, a group of 12 American basketball players set off to win an Olympic gold medal in Barcelona, Spain. Only this particular group competing as the 1992 U.S. Men’s Basketball team was special. Dubbed the “Dream Team,” they represented the first Olympic squad to feature active professional NBA players and were simply unstoppable.

Described by journalists as the greatest sports team ever assembled, the unbeatable bunch annihilated each opponent by an average of 44 points per game in capturing the gold medal. They defeated Croatia in the Olympic Finals by the score of 117-85, close by their standards. The Dream Team blew out earlier opponents by the following margins: Angola (68 points); Croatia (the first time, 33); Germany (43); Brazil (44); Spain (41); Puerto Rico (38); and Lithuania (51). 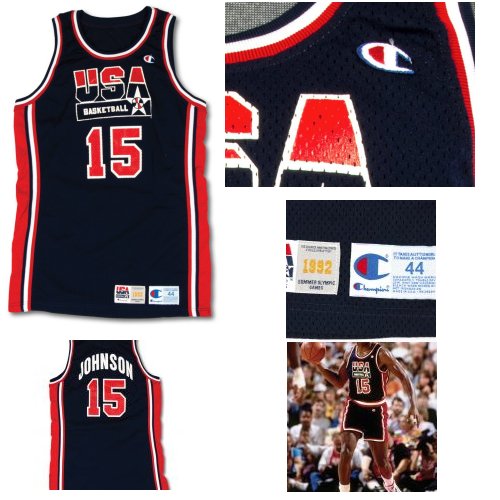 Led by co-captains Magic Johnson and Larry Bird, the team was coached by Chuck Daly and assisted by fellow NBA professors Lenny Wilkens and P.J. Carlesimo along with Duke’s Mike Krzyzewski. Every player and coach on the squad brought impeccable credentials, including Michael Jordan, Charles Barkley, Patrick Ewing, Clyde Drexler, John Stockton, Karl Malone, Chris Mullin, Scottie Pippen, David Robinson and reigning NCAA Player of the Year, Christian Laettner. All 16 members were inducted into the Naismith Basketball Hall of Fame as a team in 2010; only Laettner and Carlesimo have not been elected individually.

Without a doubt, the most captivating Dream Team member was Earvin “Magic” Johnson. After making the gut-wrenching decision to retire from the Los Angeles Lakers in November of 1991 after contracting HIV, Magic made a triumphant return at the 1992 All-Star Game and was then selected to be part of USA Basketball’s first all-pro Olympic squad. Controversy surrounded his All-Star cameo due to the lack of knowledge about the AIDS virus at that time, and there was cause for concern by some players on sharing the court with Magic during the Olympics. It didn’t take long, however, for Magic’s invaluable leadership and that wide smile to win over his USA teammates. While Jordan and Barkley handled much of the scoring load, Magic took control as the incumbent floor general, ensuring that each superstar knew his role and guiding the Dream Team to gold medal glory. His performance in Barcelona that summer would later lead to an inspiring NBA comeback.

This lot features Magic’s 1992 Dream Team jersey he wore in USA’s 115-77 blowout victory over Puerto Rico in the Olympic Quarterfinals during which the 6′ 9″ point guard contributed 13 points and 7 assists. The navy blue jersey has been professionally photo-matched to the game based on mesh hole alignment and a loose thread on the front Champion patch.

The nylon mesh jersey displays game use with signs of stretching and puckering. It is proper tagged on the left front tail with the USA Basketball Champion tag, a special adjoining tag reading “DESIGNED AND TAILORED EXCLUSIVELY FOR 1992 SUMMER OLYMPIC GAMES,” and a separate Champion size 44 tag with washing instructions. The team name “USA BASKETBALL” along with Magic’s Olympic uniform number “15” are screen pressed in Appliqué on the front in red with white trim, with the collar and arms trimmed in red, white and navy blue. On the reverse, his last name “JOHNSON” appears in white above his number “15” in red with white trim. An embroidered Champion logo patch is found on the left chest.

This is the first and only photo-matched Dream Team jersey by any player known to exist, worn by arguably USA’s most important member. A few Jordan jerseys have surfaced, but none have such indisputable documentation. It originates from the Hollywood Agent Collection, a trusted source that we have represented in previous auctions. The anonymous collector established relationships with some of the world’s biggest celebrities, including Magic. Includes LOA from Resolution Photomatching with details of the conclusive photo-match.