The “Holy Grail” of Tom Brady rookie cards sold last night for a world record $2,252,854 in the Lelands 2021 Spring Classic Auction, marking the most ever paid for a football card.  The 2000 Playoff Contenders Championship Rookie Ticket #144 Tom Brady Rookie Autograph card was graded 8.5 with an autograph grade of nine.  The $2,252,854 price tag shatters the previous record for a football card — another Brady rookie card, which sold last month for $1.32 million.

“Tom Brady continues to shatter records both on and off the football field,” said Lelands President Mike Heffner. “The GOAT, Brady now holds the distinction of having the most expensive football card ever sold. His signed Championship Rookie Ticket auto is the penultimate Brady rookie card and one for the ages.” 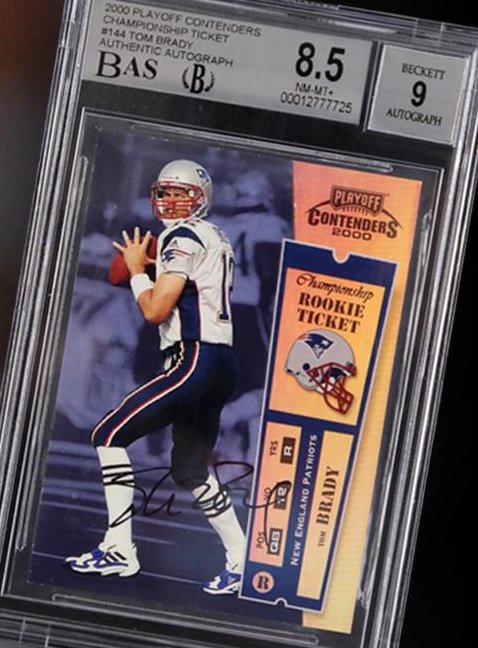 For the full results of the auction, visit https://lelands.com

The First Sports Memorabilia and Card Auction House in the World

Established in 1985, Lelands is the first sports auction house and the premier appraisers and authenticators in the entire sports hobby. Its founder, the late Josh Leland Evans, was a pioneer in the field and acknowledged by his peers as the most knowledgeable figure in sports memorabilia. Lelands has handled many of the largest landmark auctions, achieving world-record prices for countless iconic items including Babe Ruth’s 1927 Yankees World Series ring ($2,093,927), his 1919 “Curse of the Bambino” signed contract ($2,303,320), and a 1920 Ruth Yankees jersey ($4.5 million). For more information, visit https://lelands.com.