Dashiell Hammett’s Red Harvest (est. $30,000) is expected to be the leading feature in The KoKo Collection, part of the September 14 Rare Books Auction at Heritage Auctions. Drawing on his experience as a Pinkerton operative, Hammett’s momentous debut novel, published in 1929, defined the archetype for the literary private investigator. Also offered is Hammett’s 1930 follow-up, The Maltese Falcon (est. $20,000), his most popular work and among the most beloved of the genre, thanks in no small part to Humphrey Bogart’s brilliant turn as Sam Spade in John Huston’s 1941 cinematic adaptation.

“The KoKo Collection will mark the auction debut of several historically important novels,” said James Gannon, Director of Rare Books. “A collection like this only comes along once in a lifetime and indeed required a lifetime to assemble.” 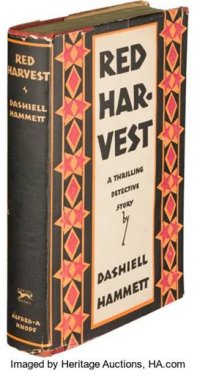 The collection features several books by authors who, like Hammett, wrote for the hard-boiled pulp magazine Black Mask. Perhaps the most famous of these authors, Raymond Chandler, has several works featured in the sale, including a presentation copy of his last masterpiece, The Long Good-Bye (1954) (est. $4,000). More Black Mask contributors crossing the auction block will be Paul Cain with his tough-as-nails Fast One from 1934 (est. $4,000) and Raoul Whitfield with his 1930 uncommon debut Green Ice (est. $2,000).

The enduring popularity of crime literature owes no small debt to the frequency of successful film adaptions made during the Classical Hollywood era, and The KoKo Collection includes several of these landmark books into film. Little Caesar by W.R. Burnett (est. $3,000), published in 1929 and adapted two years later, provided the standard by which all gangster portrayals are judged with Edgar G. Robinson’s Rico. The nearly impossible to find If I Die Before I Wake(1938) by Sherwood King (est. $2,500), served as the source for Orson Welles’s The Lady from Shanghai (1947).

Few writers’ bodies of work provided as many beloved films as Cornell Woolrich’s. His cycle of “Black” novels were adapted by the likes of Jacques Tourneur and François Truffaut; among the available Woolrich titles is a copy of The Black Curtain (1941, adapted as Street of Chance the next year), inscribed by the notorious recluse (est. $3,000).

Other top lots from this collection include but are not limited to: