The Lelands Spring Classic Auction is in progress.  We have 1000+ incredible lots of the finest sports memorabilia and cards, for you to view, consider, and bid on.  Bid, view and register for the auction at lelands.com .

Bid, view and register for the auction at lelands.com. 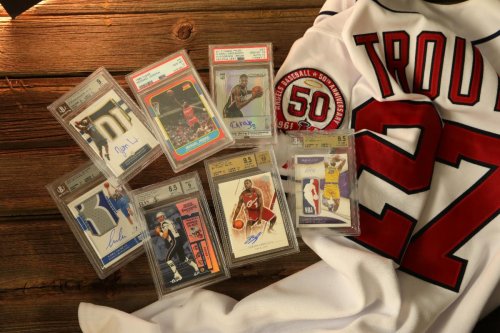 Trout is the greatest player of this generation, and his Anaheim Angels jersey from his first MLB game will likely be the most historic modern-day baseball game-worn ever sold. The spectacular jersey is photo-matched to July 8, 2011, when a-then 19-year-old Trout made his debut and set out on his path to becoming one of the best ballplayers ever. As if it wasn’t historic enough, this is also the jersey that Trout is wearing in his 2011 Topps Update rookie card.

Brady is The GOAT, further cementing his legacy as the NFL’s best with his seventh Super Bowl win, and now the “Holy Grail” of Brady rookie cards — a 2000 Playoff Contenders Championship Rookie Ticket #144 Tom Brady Rookie Autograph card— is up for bid by Lelands. The card is graded NM-MT+ 8.5.

MJ is considered the greatest NBA player in history, and being offered by Lelands is the greatest and best “His Airness” rookie card: the 1986-87 Fleer #57. The Jordan rookie headlines this complete Fleer basketball set, all of which have been graded PSA Gem Mint 10.

Another auction centerpiece is a fantastic collection of Buffalo Sabres memorabilia, headlined by the actual puck from the very first goal in franchise history, and game-used sticks from the team’s 1975 Stanley Cup Finals appearance. Additional highlights include game-worn jerseys and other gear from Sabres greats Dominik Hasek, Tim Horton and Roger Crozier.

Also on the auction block is Steelers Hall of Famer Jack Lambert’s personal collection, including game-worn gear and awards. The trove even features his teeth holder from his Steelers locker where he put his fake teeth before each game.

The auction also sports a wide variety of impressive pop culture and historical memorabilia including a Whitey Bulger archive of handwritten letters and the last known photos of him.

Get in on this spectacular collection of rare, vintage original photographs and one-of-a-kind negatives from the Brown Brothers archive.

Highlights from the Collection: 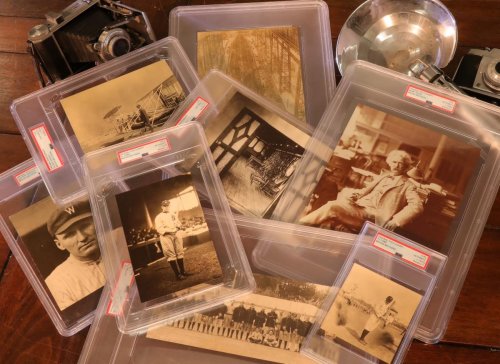