Bidding & Registration Is Open for The Memorabilia Network Inaugural Auction “Hero’s, Icons & Legends”! If you haven’t already, take a moment to register now at tmnauctions.com and ensure you are ready to go.  Bidding is now open and concludes on Sunday, November 6, 2022. If it’s been awhile since you’ve checked out the cool collectables we are offering, take a look at our catalog and start taking notes! Please email info@thememorabilianetwork.com with any questions!

This exclusive offering brings together many rare and unique items from the worlds of sports, music and entertainment. Items featuring some of the moments the world will never forget are featured throughout the auction, including items from some of the most iconic names in sports and cultural history from Muhammad Ali, Jackie Robinson, Mickey Mantle, Sandy Koufax, Magic Johnson and Kobe Bryant…. to Andy Warhol, Michael Jackson, The Beatles and The Rolling Stones. Famous signatures, iconic concert clothing, wardrobe and props from some of the world’s most beloved films, and equipment used by the world’s most revered athletes….this will truly be a once in a lifetime opportunity for collectors and fans around the world to add to and elevate their personal collections.

The Hero’s, Icons & Legends auction from The Memorabilia Network, offers 910 lots of incredible sports, entertainment and music memorabilia, the auction is truly one-of-a-kind. Featuring one of the largest offerings of Muhammad Ali memorabilia ever to come to the marketplace, headlined by the “Muhammad Ali, 1978” Andy Warhol portfolio signed by both Ali and Warhol – one of six sets in existence to be signed by both Icons. The auction will feature numerous original drawings and sketches done by Ali, one of his 1970s training worn robes, his training used jump rope, numerous signed items, and his 1978 Bangladesh passport.

Also offered is the collection of Dr. Robert H. Smalley. With over 2,000 autographed items in the collection, there truly is something for everyone! Other featured lots in the auction include a complete set of 1952 Topps baseball cards, with each card being graded including the iconc 1952 Topps Mickey Mantle card; one of Michael Jackson’s gloves worn on stage during the “Bad” era; A yearbook from Jackie Robinson’s high school that has been triple signed by Robinson; Clayton Kershaw’s game worn Dodgers jersey from his 99th career win; a Cy Young signed baseball, and a game used baseball from Warren Spahn’s 300th career victory; Numerous incredible items from Dodgers legends Sandy Koufax and Vin Scully; and an incredible array of memorabilia from your favorite teams and players from all the major sports. 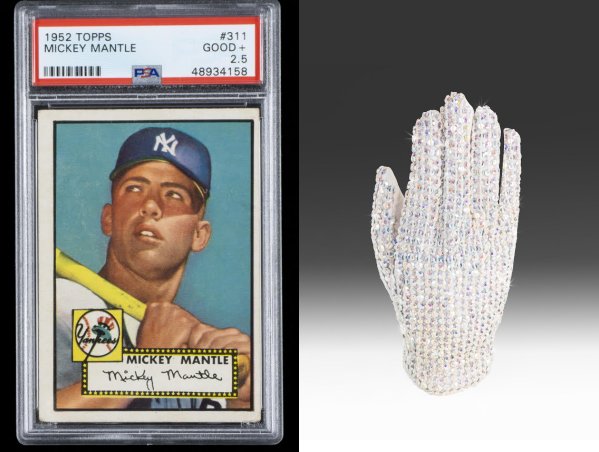 The auction will run from Monday October 24th to Sunday November 6, 2022. You must first register for a main account with TMN Auctions, and then register for the auction itself. Please email info@thememorabilianetwork.com with any questions and good luck with your bidding!

“Float like a butterfly, sting like a bee” when bidding on this iconic portfolio featuring Andy Warhol’s artistic interpretation of Muhammad Ali. Signed by both Warhol and Ali, the four 1978 prints showcase Ali in his prime, as a three time WBA heavyweight champion. In this first of a commissioned series dedicated to sports heroes, Warhol himself shot 56 polaroids of Ali at the champ’s training camp in Pennsylvania. Warhol chose four of those shots to reinterpret Ali in famous Warhol fashion, sharing his unique view of the man the world recognized as The Greatest.

Accompanying the portfolio are four images of Ali signing the prints. Per Harlan Werner, Ali’s memorabilia agent for more than 30 years, Ali has only ever signed six portfolio sets of the prints. Each one of these prints has a Certificate of Registration from Online Authentics and a Certificate of Authenticity from The Memorabilia Network. The portfolio is also accompanied by a notarized letter from Harlan Werner stating his knowledge of only six signed sets in existence and attesting to his witnessing the signing of the six sets. Each of the prints is framed. This set is edition 139 of 150. 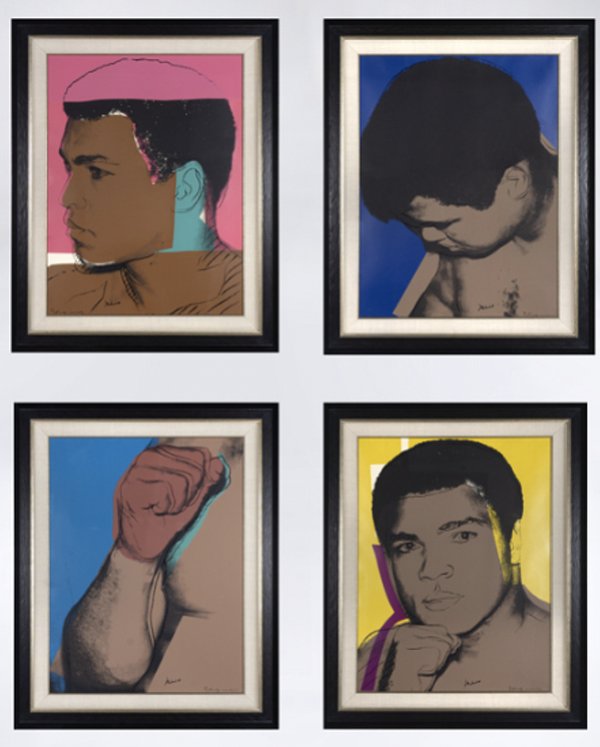 Baseball season is drawing to a close, but the thrill of the game will last year round for the winner of this iconic 1952 Topps Baseball Card Set. The significance of this collection cannot be overstated, as any true baseball card aficionado will attest. Featuring the most sought after card in baseball history, Mickey Mantle #311, this set is the hallmark against which all others are compared.

The most popular sports card set ever produced, the 1952 Topps set surpassed its predecessors in both quality and quantity, laying the foundation for what would become the modern trading card. Today we are offering a fully graded, complete set of all 407 cards originally included in the 1952 Topps Baseball set. The majority of the cards are graded in the PSA 4 to 6 range, with some grading slightly lower. The Mantle card is graded 2.5, with the overall set having an average grade of 4.12. 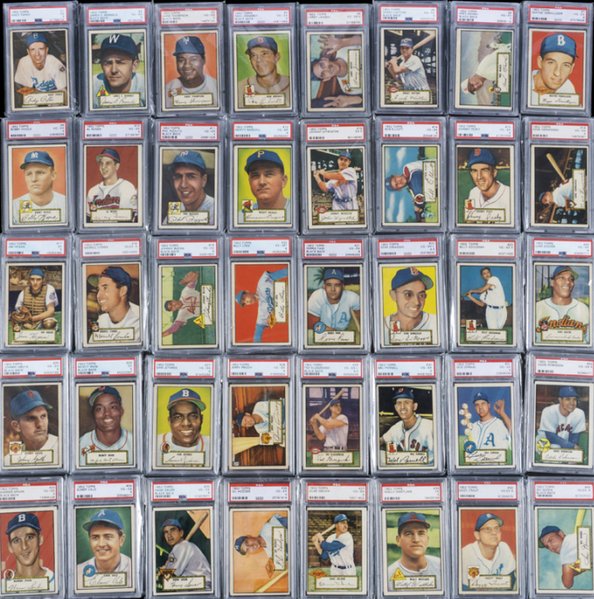 From Neil Diamond to Elton John, Bill Whitten’s fashion designs brought glamor and flair to the performances of the world’s biggest celebrities. He is also the genius behind Michael Jackson’s single rhinestone covered glove. Arguably the most recognized article of clothing in the music industry, Whitten added the glove to Jackson’s stage costume for the same reason he shortened Jackson’s pants to flash the white socks. “The audience was missing his hand and feet movements,” he explained in a 1990 New York Times interview. “They couldn’t see the quick gestures he was making.”

A truly iconic item for those who never got to experience the magic of Michael onstage, this Swarovski crystal covered glove was worn onstage by Jackson in the era of the similarly iconic Bad album. The palm side of the cotton glove is bare, with the exception of a velcro closure placed over the original snap button of the glove. The glove does show use and wear, with some dark marks on the palm side of the glove, on the index finger and thumb, consistent with pressure points where Jackson would have held his microphone in his right hand. The Bad tour was Jackson’s first solo concert tour, lasting 16 months from 1987 to 1989, and including 123 concerts for over 4 million fans across 15 countries. 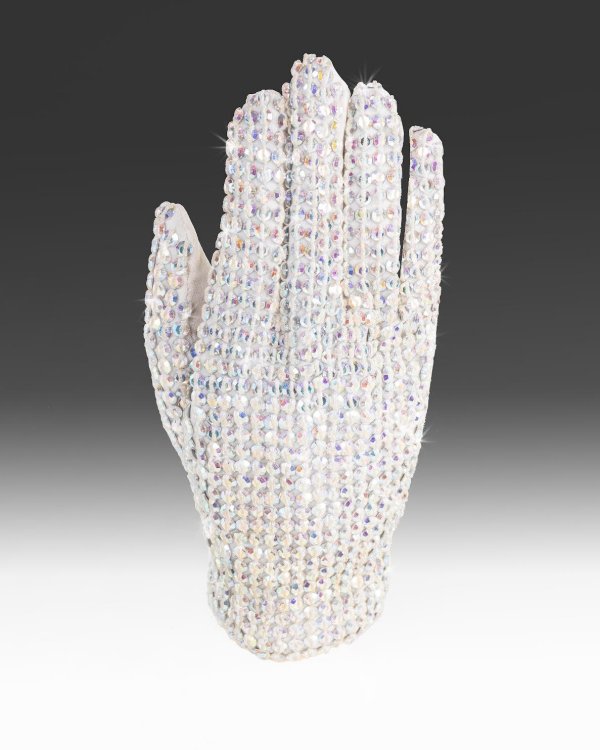 Take a moment to register now at https://tmnauctions.com and ensure you are ready to go when bidding opens at 9:00 am on Monday, October 24, 2022.

The auction will run from Monday October 24th to Sunday November 6, 2022. You must first register for a main account with TMN Auctions, and then register for the auction itself. Please email info@thememorabilianetwork.com with any questions and good luck with your bidding!