“Our spring auctions traditionally offer posters with stunning images from some of the most iconic movies ever made,” Heritage Auctions Vintage Posters Director Grey Smith said. “We believe there are rare posters in this wonderful group for every taste.” 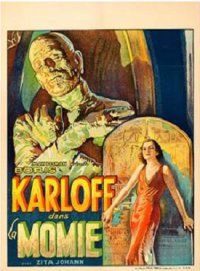 The 24-1/2-by-33-1/2-inch stone lithograph poster for The Mummy, which is making its auction debut at Heritage, is the only remaining poster of its kind. It depicts the haunting visage of Boris Karloff as the shrouded Egyptian priest Imhotep, the mummy who escapes thousands of years after being buried alive. The well-preserved piece comes from Universal’s original European distribution and is expected to sell for $60,000.

A London After Midnight (MGM, 1927) Argentinean one sheet (est. $30,000-60,000) shines a spotlight on one of the “holy grails” of lost cinema, the last known copy of the film which was destroyed in a fire in an MGM studio vault in 1965. Posters from the film, which starred Lon Chaney and directed by Dracula’s Tod Browning, have been as elusive as the film itself over the last 80 years, and this Argentinean one sheet is the first to appear at Heritage since 2009.

A 21-by-58-inch Japanese STB tatekan from The Seven Samurai (Toho, 1954) (est. $20,000-50,000) is an extraordinary collectible poster for fans of Japanese cinema and director Akira Kurosawa. This rare country-of-origin poster from Kurosawa’s most prestigious film is believed to be the only known copy in existence. A bittersweet tale of the price of war and the loss of noble warriors, The Seven Samurai is one of the most influential films in cinema history and was among the highest-grossing films ever made in Japan.

An oversized Swedish King Kong (RKO, 1933) poster (est. $20,000-50,000) features “The Eighth Wonder of the World” raging through New York, holding Fay Wray in one hand while smacking planes out of the sky with the other. Considered by most to be among the greatest horror/fantasy films ever made, King Kong definitely was one of the most innovative, using stop-motion animation that became the industry standard for decades. The rare, oversized stone litho Swedish poster, from the Kirk Hammett Collection, is reminiscent of the U.S. three sheet with its striking image of King Kong atop the Empire State Building.

Also on offer is an extraordinary post-war French release double grande poster from Casablanca (Warner Brothers, 1947), which is expected to sell for $60,000, as well as an arresting British six sheet poster from the 1939 hit The Adventures of Sherlock Holmes (20th Century Fox), which measures a mammoth 77-3/4 inches by 87-1/2 inches.