The New York Yankees “Top Hat and Bat” logo is one of the most iconic corporate brand images in history. There is very little doubt about when it first appeared and who the design is attributed to (1946-Lon Keller).  But where did the idea come from?  In the past I have found references linking Keller’s design to the World War I “Hat in the Ring” squadron made famous by Eddie Rickenbacker.  I for one have never felt that the 1946 reference had to go back more than 20 years, and then suddenly reappear with a major league club.

Recently the MEARS Museum acquired a rare piece of stadia (one of two known examples) in the form of a New York Yankees garrison/overseas style cap. This style cap has been offered publicly twice.  Read the full story by Dave Grob here. 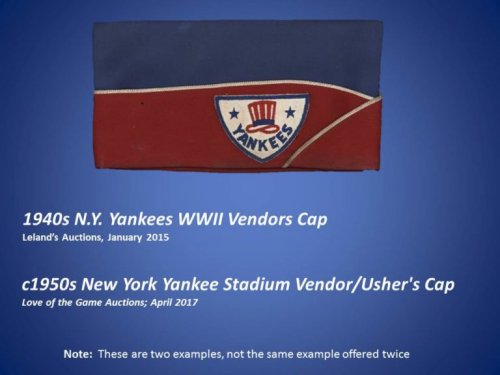