The event extended well into the early hours of Sunday morning, and by the time all the bidding came to an end, more than 370 extraordinary pieces of basketball history found new homes. Among them: the Staples Center floor signed by Kobe Bryant after his Hollywood farewell. A uniform worn by Michael Jordan at the very beginning of his mythic ascent. And a singular, shimmering-gold card featuring LeBron James in just his second year.

Heritage Auctions’ Michael Jordan and Basketball Icons Sports Catalog event realized $4,264,661, with more than 6,400 bids placed during the event – many of them after it went into extended bidding at 10 p.m. C.T. Saturday.

“There is no doubt that the market for Michael Jordan and NBA collectibles is red-hot,” said Chris Ivy, Heritage’s Director of Sports Auctions. “And the extraordinary results this weekend, with some of the most remarkable items we’ve been honored to sell, helped continue that trend.”

The event’s top lot proved to be one of the finest cards featuring one of the sport’s all-time greatest: The 2004 Topps Chrome LeBron James Superfractor No. 23, graded PSA Gem Mint 10, 1/1. Bidding on the card went well into Sunday morning, and when the wrangling subsided it sold for $720,000, more than three times its pre-auction estimate.

Its final sale price lands this LeBron on the list of top-selling sports cards of all time, in the No. 12 spot between Mickey Mantle and Shoeless Joe Jackson. 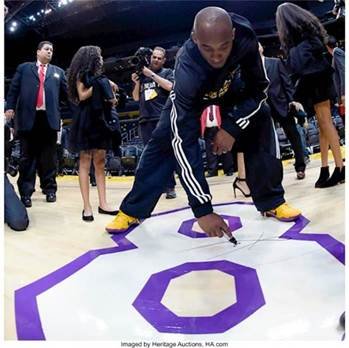 The hardwood slab upon which Bryant cemented his legend is an enormous piece of basketball legend in every way: It consists of four panels, each measuring four by eight feet, and was removed from The House That Kobe Built shortly after he scored a storybook 60 points on his way out the door of the Staples Center for the final time as a Laker on April 13, 2006. Its twin, the signed No. 24, is displayed at the Lakers’ practice facility.

The consignor will donate 10 percent of the proceeds from the sale to the Mamba & Mambacita Sports Foundation, a nonprofit intended to further Kobe and Gianna Bryant’s legacy through charitable endeavors in sports.

Michael Jordan’s 1986-87 Michael Jordan Game-Worn Chicago Bulls Uniform sold for $480,000, also transcending its pre-auction $300,000 estimate. No wonder: The jersey and shorts were definitively photo-matched to five games dating from November 1986 through March 1987. That remarkable run included a 56-point showing against the Philadelphia 76ers on March 24, and contributed to a season that proved his most prolific as a scorer, as he averaged 37.1 points per game.

This is also the uniform he’s wearing on the Nov. 17, 1986, cover of Sports Illustrated proclaiming the 23-year-old Jordan as the “One-Man Gang.”

A pair of 1985 Michael Jordan Game Worn Chicago Bulls Air Jordan I Rookie Sneakers likewise topped pre-auction expectations, selling for $117,000. They were worn by Jordan in a game against the Washington Bullets before he handed them over to a man who, moments later, sold them to a young fan who would hold on to them for decades.

As befitting an event bearing Jordan’s moniker, he dominated the proceedings. So much so, a pair of game-worn Air Jordan cleats dating to his 1994 season as a Birmingham Baron sold for $84,000. That was more than four times estimate.

But there were some young comers nipping at the heels of those Air Jordans, among them the Dallas Mavericks’ Slovenian sensation Luka Dončić.

A photo-matched jersey from Luka’s 2018-2019 Rookie of the Year season sold for $54,000 – almost twice the pre-auction estimate. And it’s a win for everyone: 100 percent of the proceeds from the sale of this jersey, which comes with a team letter, will go to the Mavs Foundation charity.

For a complete look at all the items from the Michael Jordan and Basketball Icons Sports Catalog event, go here.