It has been nearly two years since The Last Dance pulled Michael Jordan off the sidelines and back into the spotlight; two years since the documentary series sparked new debates about who’s really The Greatest of All Time; two years since old rivalries were rekindled and stale stories were spun into fresh fables. Which means it has been two years since collectors clamored anew for MJ’s rookie cards and game-worn sneakers and sweat-stained jerseys. And still, the rush remains.

Look no further than the fragment of a keepsake that sold in December — a record-shattering $264,000 paid for the stub of a ticket that gave its holder admission to an Oct. 26, 1984, basketball game at Chicago Stadium pitting the Washington Bullets against the hometown Bulls. This was the game in which a 21-year-old Jordan made his NBA debut, scoring 16 points, nabbing six rebounds, garnering seven assists and blocking four shots in the Bulls’ 106-93 win over Washington.

The stadium is long gone; so, too, most of the ticket stubs from the baller’s debut; PSA counts just 20 from Jordan’s first tip in its population report, a staggering low number for a game attended by more than 13,000. Hence, the record-setting sale in December — the “most expensive collectible sports ticket ever sold,” ESPN noted at the time — which paves the way for an even more spectacular offering in February.

Heritage Auctions will offer in its Feb. 26-27 Winter Platinum Night Sports Auction several extraordinary Jordan items, chief among them a specially altered pair of Jordan’s game-worn and signed Nike Air Jordan 1s from an April 1986 game in Milwaukee. In any other auction, those photo-matched sneakers would own center stage.

But one item also in the event threatens to seize the spotlight from Air Jordan’s Air Jordans: the only complete ticket from Jordan’s October 1984 debut known to exist, authenticated and slabbed by PSA. 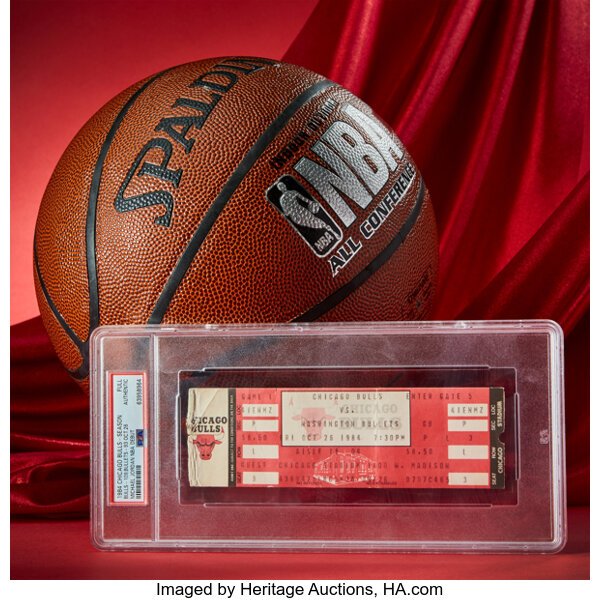 “I’ve been wholly aware of what’s going on with Michael Jordan’s debut stubs for several years, and always saw that particular item as one of the coolest pieces of MJ memorabilia you could purchase,” says Heritage Sports Consignment Director Chris Nerat. “And I always thought I would get a phone call from someone with that elusive complete ticket, because surely one existed. Well, that call came about three weeks ago, and the first thing I said was, ‘I have been waiting on this call. I always knew it would happen at some point. I just didn’t think it was going to be today.'”

That caller was Michael Cole, who, in 1984, was a Washington, D.C., native starting classes at Northwestern University in Evanston, some 14 miles and a long train ride from Chicago. As Cole writes in the letter of provenance accompanying the ticket, he was a deeply passionate basketball fan, especially when it came to his hometown Bullets. As it happened, his family was friends with Bullets executive vice president Jerry Sachs, “and my father was hoping to surprise me with tickets to the Bulls’ season opener considering the Bullets were their visiting opponent.”

Sachs had two tickets waiting for Cole at Chicago Stadium will-call. Problem was, given the lengthy trek from Evanston to Chicago, the teenager could find no one willing to accompany him. So he merely pocketed the extra ticket, and kept it with “my collection of tickets from other memorable sporting events I had attended.”

As Cole notes in his letter, “It’s funny to me in retrospect that my primary enthusiasm for attending the game was to support my hometown team more so than witnessing the start of Michael Jordan’s legendary career.”

Besides, Cole notes, he’d seen Jordan play plenty — as one of the North Carolina Tar Heels who constantly bedeviled his beloved Maryland Terrapins.

“It’s hard to imagine a ticket from any sporting event more valuable or significant than this one,” Nerat says. “Sure, a whole ticket from Jackie Robinson’s Ebbets Field debut would be up there, as would one from Babe Ruth’s first appearance. But as far as we know, none of those exist, which makes this, for now, the Mona Lisa of ticket collecting.”

Which makes these Air Jordans … The Starry Night of shoe collecting? Close enough.

The Air Jordans offered in the Winter Platinum Night event were worn by Jordan during the Bulls’ 116-107 loss to the 53-win Milwaukee Bucks on April 1, 1986, a night Jordan came off the bench to score 28 points. Jordan played in a mere 18 games that season after suffering a broken foot, which he refused to stay off as the playoffs approached. As Jordan later recounted in The Last Dance, he threw a tantrum when told to stay on the bench for fear of reinjuring the foot: “I just lost it.”

As the Winter Platinum Night catalog notes, these Air Jordans “were slightly altered from their standard format to mitigate the threat to Jordan’s healing bones, trading out the standard soles for examples used on ‘Nike Dunk’ models, which were both softer and wider.” That alone makes them unlike any other pair of Air Jordans worn before or after.

Further, and most important, these shoes have been photo-matched to the April Fool’s Day tussle with the Bucks.

A photo from the April 2, 1986, Milwaukee Journal Sentinel is among the exhibits revealing a manufacturing error: The right shoe, signed with a ballpoint by Jordan, “is missing the third eyelet down from the top of the shoe,” reads a letter from MeiGrayGroup, the authentication service with whom the consignor registered the shoes. A second photo also reveals “the large white scuff on the left side of the shoe,” according to MeiGray.

It’s clear, too, these were Jordan’s Jordans, as inside each shoe is a white stamp — the Nike code — that reads, “13 860304STPS.” Air Jordan collectors know what that means: These are size 13 shoes manufactured between March and April of 1986, with “ST” noting the site of production and “PS” meaning “Player Sample,” meaning these were meant for Jordan alone … until someone else scores the sneakers in February.

“I was incredibly excited when the initial inquiry came in for a pair of Jordan game-worn and photo-matched Air Jordan 1s, as these are considered to be the pinnacle for game-worn Jordan sneaker collectors,” says Chris Ivy, founder and president of Heritage Sports. “These are the most iconic sneakers in the world, worn by their namesake in competition — and photo-matched to top it off. As any sneaker collector will tell you, photo-matching sneakers to game action from this period or before is an incredibly difficult task. Thankfully, the manufacturing error with the missing eyelet allowed these sneakers to be verified as being the exact pair on Jordan’s feet during this April 1986 game. Should collectors pass on this pair today, they will kick themselves tomorrow.”