The incredible Balfour manufactured 10K gold 1969 UCLA Bruins NCAA national championship ring was presented to Lew Alcindor (Kareem Abdul-Jabbar) and features a blue stone top with “UCLA N.C.A.A. CHAMPIONS” reading around it. Kareem capped off his college career with his third-straight title in 1969, paving the way for his Hall of Fame NBA career. One of the most dominant players in college history, Kareem’s UCLA teams combined for an 88-2 record in his three seasons with the Bruins and this ring is a symbol of that greatness.

The historic Balfour 14K gold 1971 Milwaukee Bucks NBA championship ring was presented to Lew Alcindor (Kareem Abdul-Jabbar) and features a beautiful round diamond set on a basketball design background. “NBA WORLD CHAMPIONS” reads around the setting. Kareem was only in his second season in the NBA and this was his first championship as a pro. Kareem led Milwaukee to their only title to date and this season was the first of his six championship seasons. 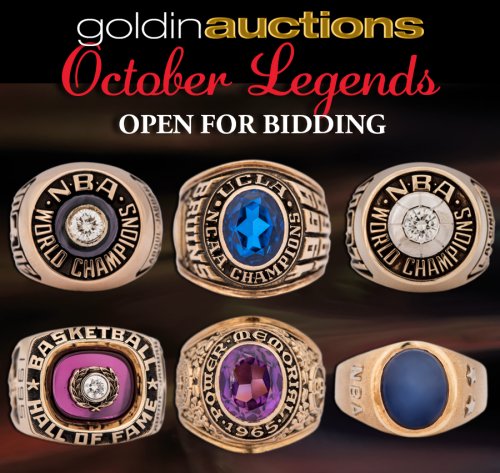 The stunning Balfour 14K gold 1982 Los Angeles Lakers NBA championship ring was presented to Kareem Abdul-Jabbar. It is highlighted by a round diamond set on a larger round purple stone. “NBA WORLD CHAMPIONS” reads around the stone’s setting. Kareem won his second title with the Lakers in 1982 and third of his illustrious career. An incredible Lakers’ championship ring!

The is the very rare Balfour 10K gold 1995 NBA Hall of Fame induction ring presented to Kareem Abdul-Jabbar for his induction into the James Naismith Memorial Hall of Fame in Springfield, Massachusetts in 1995. This remarkable ring features a large red colored stone with a CZ set on top. “BASKETBALL HALL OF FAME” (along with images of two stars) appears in relief work around the stone. This ring commemorates one of the greatest basketball careers of all-time.

This is a rare item – a 1965 Kareem Abdul-Jabbar (Lew Alcindor) Power Memorial Academy class ring. Kareem ’s basketball dominance started in high school, while at Power Memorial in New York. Over a three-year span, while playing then as Lew Alcindor, Abdul-Jabbar led Power Memorial High School to a 95-6 record, winning three straight city titles along the way. He would finish his high school career with over 2,000 points and 2,000 rebounds. The ring features a beautiful light purple color stone in the center, with “POWER MEMORIAL 1965” appearing around the stone. An amazingly rare ring from the pre-college era of arguably the greatest basketball player of all-time.

The 1971 NBA All-Star Game ring was presented to Lew Alcindor (Kareem Abdul-Jabbar) for his participation in the 1971 NBA All-Star Game. This stunning ring was for Kareem’s second NBA All-Star Game selection of his 19 total and is highlighted by a gorgeous blue stone center. “NBA” reads on one side of the ring while the other side displays the images of two raised stars. The inside of this ring features a “14K O-S” mark as well as detailed engravings that include the initials “LA” (for Lew Alcindor) and “San Diego, Cal – 1971”. A rare ring from the early pro career of Kareem Abdul-Jabbar.

To bid on the rings in the Goldin Auction October 27, 2018 auction go to https://goldinauctions.com/Category/Kareem_Abdul_Jabbar_Collection-219.html.

To bid on all items in the Goldin Auctions October 27, 2018 auction go to https://goldinauctions.com/catalog.aspx